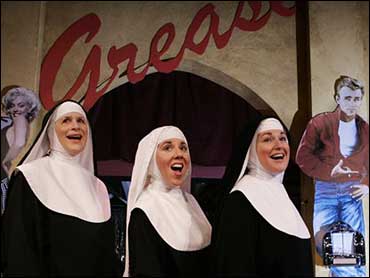 The wacky nuns known as the Little Sisters of Hoboken have made success a habit.

For more than 20 years, their cheeky gags and jokes -- bawdy by Catholic-school standards --have made Dan Goggin's off-Broadway musical "Nunsense" a hit around the world, inspiring six spin-offs and thousands of productions.

"Nunsense" now has a permanent home: a new, 176-seat theater in the San Francisco Bay area that features memorabilia from the show and hosts four versions of the musical year-round.

"Today, people need to laugh," said Goggin, dressed in a black monk's robe before a recent performance at the Campbell Theatre in Martinez, a suburb about 35 miles east of San Francisco. "They're just looking for a laugh somewhere."

The vaudeville-style show's goofy skits and songs play off the popular perception that nuns are staid and severe. The nuns in Goggin's musical are anything but traditional. Dressed in their black-and-white habits, they dance, strut and cavort about the stage.

The show's premise is simple: The nuns must raise money to bury colleagues who died of botulism after eating soup cooked by one of the sisters. So they put on a variety show that includes ballet, gospel singing and a wisecracking hand puppet.

"People are very fascinated by the traditional nun," said Goggin, who went to Catholic school in Michigan. "Even when we were kids in school, you couldn't resist looking at sister and wondering how she's put together."

The musical features plenty of puns: one of the songs is entitled, "Nunsense Is Habit Forming." At one point, the reverend mother unwittingly gets high after sniffing a bottle of "Rush."

Goggin, who began his career singing in a Broadway musical, isn't looking for the highbrow laugh. He described the show's humor as "plain-folks funny."

"We never try to be sophisticated or deep," Goggin said. "This is to come in and have a couple of hours of just pure entertainment."

The formula works. Since the original "Nunsense" debuted in New York City in 1985, seven versions of the show have grossed more than $500 million, Goggin said.

The theater is run by the Willows Theatre Company, which had great success performing the musical in the past. When the city of Martinez offered downtown theater space rent-free, the company, based in nearby Concord, jumped at the chance to offer the show year-round, said artistic director Richard Elliott. The company raised more than $600,000 in donations to help renovate the theater space, which used to be an auto parts store.

The theater's lobby is a showcase of "Nunsense" memorabilia, including greeting cards, sweat shirts and coffee mugs.

Pictures of more famous cast members, dressed in their habits, hang on the wall along a spiral staircase. Movie-TV actress Jennifer Garner and comedian Phyllis Diller are among the beatific faces, along with Olympic diver Greg Louganis, who played one of the sisters in "Nunsense Amen!" - which had an all-male cast playing the nuns.

The theater also gives "Nunsense" fans a glimpse into the show's origins.

Goggin got the idea after a friend gave him a mannequin in a nun's habit as a joke in 1981. He began selling greeting cards that featured the mannequin and told buyers he was raising money to cover the expense of burying four sisters.

The show's humor may seem old-fashioned and corny to some viewers, but "Nunsense" has enthusiastic fans, especially among older theatergoers with a Catholic upbringing.

Livia Sargent, 73, attended Catholic boarding school and watched the show for the second time last week. "I was raised a Catholic," she said, "so I enjoyed gentle fun being made of how the church used to be."