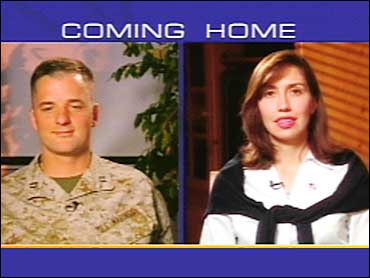 For Shawn Basco, a U.S. Marine captain in Iraq, his 33rd birthday was one he'll never forget. That's because he was wounded that day when his unit came under fire in a presidential palace in Baghdad.

While he is recovering at a hospital in Landstuhl, Germany, his wife, Sonia is holding down the fort at home in San Diego, Calif. So The Early Show made the most of television and gave them a chance to connect.

"I'm up walking around and things are doing good. Doing a lot better now that I'm looking at you. This is pretty cool," Basco told his wife.

The couple had not seen each other since Feb. 4; they were so excited to talk to each other that they talked at the same time. Each was happy to see that the other looked well and both expressed the hope that they could be together soon.

"I should be heading out of here pretty soon, getting back to my wife," Basco said.

Six days ago, Basco, an F-18 pilot attached to Bravo Company as a forward air controller, was in Baghdad at the al-Azimiyah palace compound after fierce fighting earlier in the day against Iraqi soldiers and other gunmen. The fighting began before dawn as the 1st Battalion, 5th Marines, rolled down highways and streets in east Baghdad toward the 17-acre compound.

Basco rolled into the presidential palace, providing air support for the infantry.

"But once the fighting got on and we started to collect casualties," he explained, "unfortunately, my role shifted a little bit to bringing in medevac helicopters and trying to get those guys out of there, to get them back to a safe area before things ran out for them. As well as bring in more ammunition and supplies for us,"

The presidential palace, built for the former Iraqi leader Saddam Hussein, is an ornate two-story structure that had been badly damaged by coalition air strikes and was deserted. But as the Marines entered the 17-acre compound, they came under fire from Iraqi gunmen.

"As we came up to the palace, several of the Fedayeen troops, which are Saddam's militia - that he hired from other countries, as well as the elite Republican Guard who were protecting the palace area and the surrounding neighborhoods, were engaged by us first, and they started returning large volumes of fire. And then as we took the palace, it seemed to be a little bit of chaos on both sides as we seized into the palace as well as defended from the perimeter and the neighborhood outside," he told The Early Show co-anchor Julie Chen.

Basco said his injury is nothing compared to injuries other Marines got.

"During the course of the battle, we were trying to get medevacs in to the landing zone," he said. "Basically, I was using Saddam Hussein's front yard, literally, to land helicopters in. As that was going on and I'm loading up the wounded, a rocket-propelled grenade came into the landing zone area there and a piece of the shrapnel had struck my right leg. Not a bad wound. Well, enough for me to continue on with the flight," he said.

Basco, who is from Cleveland, braved enemy fire throughout the day and coordinated miracle evacuation flights while carrying the wounded to a grassy area near the compound's river-side swimming pool.