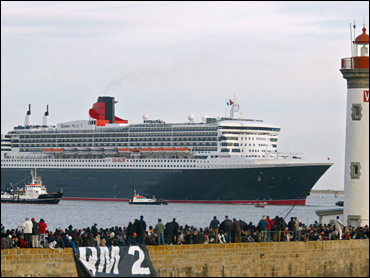 The Queen Mary 2 is the largest, longest, tallest, widest and possibly the grandest ocean liner ever built.

Queen Elizabeth II is christening the Queen Mary 2 on Thursday, Jan. 8, and the ocean liner will sail from Southampton in London next Monday, after five years in the planning.

Travel journalist Valarie D'Elia provided a peek at the ship on The Early Show.

"This is a ship of superlatives," D'Elia described it. "Just for a sense of how big it is, there are 25,000 signs on board that are showing you the way around. The promenade deck goes around three times and it's 1.1 miles. It's actually longer than the Eiffel Tower is tall. This is an ocean liner and not a cruise ship. It goes at 30 knots."

The Queen Mary 2 will offer 15 trans-Atlantic crossings in her inaugural year as she takes over the role formerly occupied by her sister ship, Queen Elizabeth 2, as Cunard's transatlantic liner.

The ship also has a planetarium, shops, a spa and a pillow concierge for passengers to pick the kind of pillow they want, D'Elia explained. As for the Canyon Ranch Spa she noted, it is on two floors employing 50 people to assist passengers in their 20 massage rooms and facial rooms.

But that is not all, D'Elia notes, "The atrium itself, as you go into the grand lobby, is seven floors high. This is a very tasteful ship of the 21st century. And it really embodies the legend of the Cunard line and all the ships that passed before her."

The christening of the ship will be done in a traditional way, D'Elia noted the queen will be "using the same gold scissors that has been used at the launches of the Queen Mary, the Queen Elizabeth and the QE2. There is a lot of tradition with this ship and you'll see it in a significant way on board the QM2. The original whistle from the Queen Mary will be on board this ship. It's one of three."

Queen Mary 2 is a ship that's already been touched by tragedy. About 15 people died last fall at the France shipyard. At that time, Cunard did not have control of the ship.

D'Elia says, "The shipyard is taking responsibility for that. But there is an overriding sadness. And I believe that during the benediction, today at the christening, there will be a mention about those lives that were lost."

This is certainly a luxury liner. And luxury is not cheap: $1,500 per person to $25,000 for six days to cross the Atlantic. But D'Elia noted, "It's not a lot of money if it's around $1,900 and then you get your airfare back. But the question is, will they fill a ship this size with as many as 3,000 passengers when you can just fly to England in six hours instead of six days? So it remains to be seen. But it's being positioned as more than just a mode of transportation."

The Queen Mary 2 is the first trans-Atlantic ship to be built in the last 30 years. The ship allows passengers to go further and faster, offering six-day trans-Atlantic crossings and a range of cruise itineraries.