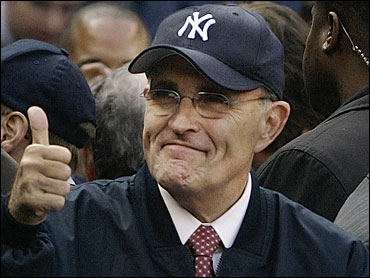 Jim Fassel's startling guarantee started it all. Next came a six-game winning streak.

On Sunday, the New York Giants added the most emphatic touch to their stunning season shocking the Minnesota Vikings 41-0 in the biggest rout in NFC championship history to get to the Super Bowl.

Not even Fassel would have promised that.

His pledge to make the playoffs, "was the match, and the fire has been burning since then," said Fassel, who made the prediction following a loss to Detroit that left the Giants 7-4. "It told everyone to shut up, we were going to do this ourselves."

"I wanted this game," said Collins, whose career has been marked more by controversy than success. "All week, people were talking about the matchup of our offense against their defense, but we knew we could throw the ball."

They did, to the tune of 380 yards in the air, and 518 overall. His teammates had their way with the Vikings despite being underdogs. Minnesota, which rarely plays well outdoors, was a 2-point favorite.

They'll get the chance for their third NFL title in the Super Bowl era by playing the AFC champion, either Baltimore or Oakland, which met later Sunday. The championship game will be Jan. 28 in Tampa, site of the Giants' title victory in 1990.

The Vikings became the first NFC chamionship shutout victim since the Giants beat Washington 17-0 en route to winning the Super Bowl following the 1986 season. It was their first shutout loss in 158 games since Dennis Green became coach in 1992.

"Nothing we tried to do today worked," Green said. "You think you know what the team can do, and then nothing works."

All-Pro receiver Randy Moss was so distressed that he wondered about the team's future.

For the Giants, however, it was the seventh straight victory since Fassel's guarantee. They did him one better.

"I think we shocked a lot of people, but we didn't shock ourselves," Fassel said.

Collins, whose career was revived when he joined the Giants in 1999 following controversial stops in Carolina and New Orleans and bouts with alcoholism, was remarkable from the outset.

He threw for four touchdowns and 338 yards in the first half, then added a fifth TD pass just 2:54 into the third period. He finished 28-for-39 for 381 yards and waved to the crowd from the sideline when his stats were announced.

"His decisions got better and better," guard Glenn Parker said. "It was a wonderful thing to see. This was the most directed I have ever seen him. He was playing with an intense heat, but he nevr let it get out of control."

Culpepper was held to 78 yards passing and threw three interceptions. Carter had three receptions for 24 yards in what might be his final game of a 14-year career.

"We made a lot of mistakes and played bad football," Carter said. "I've done every thing I've had to do to win a championship. "

Collins had the Giants up 14-0 before some in the blue-clad, towel-waving crowd had settled into their seats.

By halftime, it was 34-0, the largest such margin in NFC championship game history. But the Giants (14-4) kept rolling, right into the NFL's title game.

When the post-game celebrations began to Bruce Springsteen's "Glory Days," the players gathered around a makeshift stage. Many of them wore "NFC Champions" T-shirts and baseball caps as the championship trophy was presented to co-owners Mara and Robert Tisch.

The Giants, hardly known for a fast-break offense, struck so suddenly that they looked like, well, the Vikings. Just 2:13 into the game, they led 14-0.

Collins probably could have thrown left-handed and still hit his wide-open receivers on the opening drive. Operating against Minnesota's injury-depleted secondary defensive backs Orlando Thomas and Kenny Wright were sidelined he hit three straight passes, with Hilliard speeding past Keith Thibodeaux on a fly pattern for the 46-yard touchdown at 1:57.

When the Vikings (12-6) misplayed the ensuing kickoff, Lyle West recovered for New York. On the next play, Greg Comella sneaked down the right sideline for his first career touchdown, an 18-yard pass from Collins.

Although Collins was picked off twice in the first quarter, it mattered little. Minnesota, which looked so efficient in last week's playoff victory over New Orleans, had returned to the sputtering form that marked its three-game losing streak to finish the season.

Culpepper, in his second playoff game, was completely overmatched. He rarely got time to find his stareceivers. And they weren't open, anyway.

"The big key was getting in Culpepper's face," said cornerback Jason Sehorn, who mainly covered Moss. "We did not give them free releases down the field. Receivers don't like to get hit and we hit them all day long."

With the Vikings defense a sieve and Minnesota's special teams collapsing Mitch Berger got off a 26-yard punt on which he fell down the Vikings had no shot at getting back to the Super Bowl for the first time in 24 years.

The Giants made sure of that with a 24-point second quarter. Brad Daluiso made a 21-yard field goal to open the period. Collins hit Joe Jurevicius for an 8-yard score. After Daluiso added a 22-yarder, Collins closed the remarkable first half with a 7-yard pass to Hilliard on third down.

New York had 386 yards to 45 for Minnesota. The 34 points surpassed the Giants' season high for a game. Hilliard already had eight catches for 146 yards.

When Culpepper fumbled on a sack on the first play of the second half, the Vikings might as well have taken the fans' white towels and begun waving them in surrender.