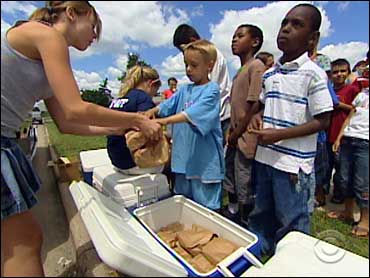 Crystal Hamilton is taking her four kids and her niece out to lunch.

"Here they get a little more than I can give them at home," she said.

Which is to say, not much - a fact that hasn't escaped her 12-year-old daughter, Kayla, CBS News correspondent Seth Doane reports.

"Have you noticed times getting tougher for your parents?" Doane asked.

The Hamilton kids, along with more than 100 others, go to a park on most summer days. But at their park, the jungle gym is not the main attraction.

"How many of you came here to have the lunch program?" Doane asked.

Because in Waukesha, Wisc., there is such a thing as a free lunch.

Five days a week, Salvation Army staff and volunteers hand out bag lunches to kids who might otherwise go without.

"When you see all these kids lining up for food, what goes through your mind?" Doane asked.

"Just that, you know, if we weren't here, there'd be a lot of hungry kids in this community," said Salvation Army volunteer Rachel Fjelling.

"Milk is almost four bucks a gallon now, that's the same price a gallon of gas is. So you decide, what do I want? The milk? Or do I need the gas for the car?" Hamilton said.

It's a choice they don't have to make these days. The car doesn't work, and they can't afford to fix it.

Hamilton was laid off from her job in an accounting office last January; her husband, O.B., lost his job as a commercial driver around the same time. He's now cleaning carpets for roughly half of what he used to make.

"I don't have no discrimination on what jobs I take - if it pays, it pays," he said.

"How much time do you spend thinking, worrying, about money?" Doane asked.

"People that are well off, where they both have a mini-mansion and cars and stuff, they don't understand how it is to struggle. They just don't," Crystal Hamilton said.

But the Hamiltons do. They need government assistance to rent part of their house and to feed their family.

O.B.'s even taken up hunting - for the sustenance.

When he's out hunting, is it sport, or is it more serious? Is it putting food on the table?

"Putting food on the table," he said.

But this spring's rain flooded their basement - and ruined last season's catch.

"This is the freezer here," Crystal Hamilton said. "It was stacked all the way with venison."

"Does it feel like sometimes you're getting hit and hit and hit?" Doane asked.

The Hamiltons are quick to point out that plenty of others have it worse - but when an extra sandwich is a welcome relief, they know they don't have much.

On the web
A Shaky Economy