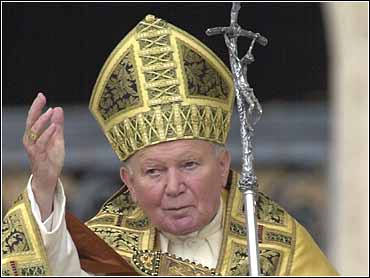 In a sunlit ceremony of ancient ritual in St. Peter's Square, Pope John Paul II on Wednesday installed a record number of cardinals, 44 new princes of the church to help him care for his flock worldwide.

In a sign of the variety of the latest men John Paul called from 27 countries to be part of the church's most elite group, some new cardinals from eastern Rite churches chose for the first time not to place on their head the three-cornered red biretta but keep their traditional headgear. Ignace Moussa I Daoud, a Syrian patriarch and now a top Vatican official, kept his black, flat-topped hat.

Particularly rousing cheers, a reflection of the number of well-wishers, went up when the pope in his sometimes slurred voice pronounced the names of U.S. theologian Avery Dulles, New York Archbishop Edward Egan and Washington Archbishop Theodore McCarrick.

Dulles, at 82, the oldest of the new cardinals and two years older than the pope, used a cane to walk up the steps of St. Peter's, the last of all the churchmen to kneel before the pontiff. When Dulles stood up after embracing the pope, his biretta tumbled off.

Among the first to go up was Vietnamese Cardinal Francois Xavier Nguyen Van Thuan, 72, who was imprisoned by Communists after the 1975 fall of Saigon.

John Paul gave a particularly warm greeting to one of his closest aides, Jesuit Roberto Tucci, patting on the back repeatedly the Vatican Radio official who helps plan the pope's trips abroad.

With the ceremony, the total number of cardinals rises to 184.

The red color reserved for cardinals represents the challenge the pope presents them: "Be ready to spill blood if need be to spread the faith."

"Every Christian knows he is called to a faithfulness without compromise, which can require even the extreme sacrifice," the pope said in his homily.

With the new princes coming from five continents, John Paul asked: "Is this not also a sign of the ability of the church, already in every corner of the planet, to understand peoples with different traditions and languages?"

Behind the unchanging ritual is the changing face of the Catholic church at the start of its third millennium - less European, and more developing world, the place where the faith is expanding.

"He probably was trying to satisfy the needs of a rapidly expanding church around the world," Dulles said on the eve of the ceremony.

With Wednesday's ceremony, the number of voting-age cardinals jumped from 120 to 135.

All but 10 were appointed by this pope; most shae his conservative views on sexual and other morality matters and liberal ideas on social justice issues such as workers' rights.

For centuries, Italians were virtually synonymous with the Vatican and the Krakow bishop's election in 1978 as the first non-Italian pontiff in 455 years shocked many.

Now 51 cardinals are from the Americas. Europe has 96, but many are aging and not eligible to vote in the conclave.

The largest grouping after Europeans are Latin Americans, 33, with 27 of voting age. Latin America has about 40 percent of the world's one billion Catholics.

Among the new Latin American cardinals is one of the youngest and one some observers say has a shot at being the next pontiff: Oscar Andres Rodriguez Maradiaga, 58, the first cardinal from Honduras.

Like so many in the College of Cardinals, he skirted questions about the next conclave.

"Only the Holy Spirit knows," he said in an interview, relying on the familiar formula response to conclave questions.

"I'm not considered `papabile' (a papal contender)," he hastened to add. "Those were the words of some friends."

A few days earlier, another new Latin American cardinal, perhaps not yet versed in the unspoken edict against talking about conclave politics, was unusually frank.

Caracas Archbishop Ignacio Antonio Velasco Garcia said the next pope would likely be from Latin America. Then he even raised his hand to show how he'd vote.

Much will depend on when the next conclave is held. John Paul has named 201 cardinals during his papacy. Forty-one never lived to see a conclave.