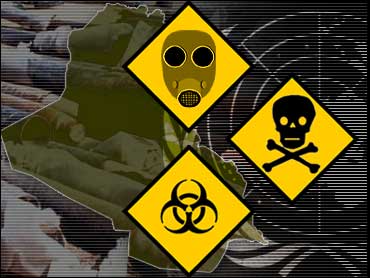 U.S. forces in Iraq have located and are testing three trailers that could be part of mobile biological weapons labs, according to media reports, as some weapons hunters prepare to head home after more than a month of all but fruitless searches.

NBC and The New York Times say the trailers were found near Mosul in northern Iraq. If proven to be biological weapons labs, they could constitute one of the first finds of the illegal weapons that were the rationale for the U.S.-led war.

The Pentagon acknowledged last week that it had located and was testing a single trailer that may have been part of a mobile biological weapons lab. That trailer contained a fermenter than could have been used to manufacture anthrax or other agents. The vehicle had been cleaned with a caustic substance, however, so no toxic agents were found.

It was unclear what purpose that trailer would have served other than a mobile lab, but intelligence officials told The Washington Post that it was unclear if the lab had ever actually been used to create toxins and, if so, when.

The failure to find the vast stockpiles of chemical and biological weapons so far has led U.S. officials to suggest that Saddam Hussein ordered the weapons destroyed or hidden before the war.

Those teams are charged with investigating everything from potential war crimes committed by Saddam's regime to alleged terrorist connections with al Qaeda.

But the change in command will not mean beefing up the size of the search teams. In fact, two officials said the field teams — under pressure from Washington and overburdened by a mammoth list of suspected weapons sites — could become smaller.

The 75th Exploitation Task Force, began with a list of 900 suspect sites, 90 of them deemed high-priority. Of the top sites, 75 have been examined, commander Col. Richard McPhee said Thursday.

Nineteen of those top sites were deemed most likely to contain weapons, but only two remain to be searched. Of 68 non-weapons sites where clues were thought to exist, 45 have been reached. There has been no success on either list to date, according to The Post.

Some team members and even officials back in Washington have begun to doubt actual weapons will be found. Instead they now talk of finding evidence of infrastructure that could have been used to quickly produce unconventional weapons.

Army Col. Robert Smith, leader of the Defense Threat Reduction Agency, told the Post that his officers don't "think we're going to find chemical rounds sitting next to a gun."

"That's what we came here for, but we're past that," he said.

Poor intelligence is blamed for some of the problems; so is a lack of translators.

Few scientists have offered information, and U.S. officials have said even senior Iraqis in custody are continuing to insist the country wasn't secretly developing weapons of mass destruction in recent years.

The current teams also haven't been tagging or cataloguing sites — nearly all of which were looted by the time the teams arrived. In every case, they have been unable to determine what, if anything, might have been taken at any given time.

Lt. Col. Michael Slifka, an arms control expert who helped put together the Site Survey Teams, said the teams were conceived to be rapidly sent to suspicious sites. Securing those locations from theft wasn't considered in advance, he said.

A U.S. team has detected significant radiation at a test range 34 miles west of Baghdad. The New York Times reports that finding of what could be Cobalt-60 at the Amiriya test site doesn't prove Iraq had an illegal weapons program, but does raise concerns that nuclear materials — potentially useful for a dirty bomb — may have been looted.

Several of the most sensitive sites are being guarded by U.S. troops, but their presence is likely making the areas appear even more valuable. There are reports of civilians finding back ways into the sites to remove more items.