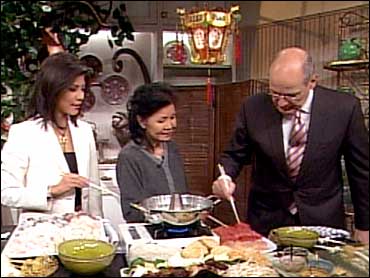 According to the Chinese Lunar calendar, beginning Jan. 22 through Feb. 8, 2005 people of Chinese descent will celebrate the Year of the Monkey. Depending on the calculations the lunar year could be either 4701 or 4702.

No matter the date, celebrating the Chinese New Year is all about family and ushering in blessings of great luck and good fortune. The Early Show co-anchor Julie Chen and her mother Wan-Ling Chen kick off the New Year with a traditional Chinese Fire Pot or "Huo Kuo" and make Pot Stickers.

Chinese New Year celebrations can last an entire month, two to three weeks or just one day depending on the family. No matter the length of the party one thing remains constant, there's always an abundance of food.

In the Chen home the Chinese New Year generally begins on New Year's Eve with a big family meal called Huo Kuo. The fire pot, in it's finished form is basically a huge soup.

Mrs. Chen says, "Years ago in China, you had to cook the pot over charcoal and the fire was very slow so everybody sat around and talked about the past. You carry on conversation and cook so you can enjoy everyone's company. This gives you a warm feeling that says 'I love you.'"

The hot pot in which "Huo Kuo" is prepared doesn't look like your traditional soup pot. These days the pot filled with a little water is heated over a tabletop butane gas burner into which meat, fish, vegetables and noodles are cooked.

Behind The Scenes On 'Without A Trace'

The following are the recipes:

Huo Kuo Fire Pot - Chinese Fire Pot Feast
Any of the following foods can be served in varying varieties:

Vegetables: Use one, some or all of them
Bean sprouts
Napa cabbage
Seaweed
Noodles
Mushrooms
Tofu
Rice cakes

Sometimes small individual strainers are used as well as chopsticks for dipping or to fish out morsels that fall into pot.

Traditionally, diners start with meat first and then move onto vegetables. As the dinner progresses, the ingredients add more and more flavor to the broth.

Instead of noodles, the fire pot can be served with steamed buns or dumplings.

How To Dine Hot-Pot Style

Years ago in China, pot stickers were shaped like gold or silver nuggets to symbolized prosperity and good fortune.

Julie Chen was born in the year of the rooster.