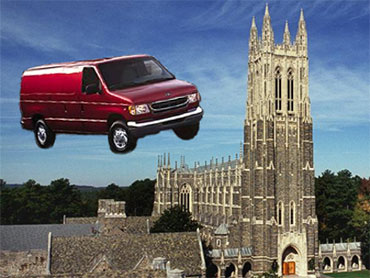 Ken Ilgunas graduated from the University at Buffalo several years ago with a history degree and $32,000 of college loan debt. After finally paying back his loans in full, he swore he'd never go into debt again.

And so Ilgunas, 26, who is attending Duke University's graduate school, is determined to complete his program debt-free, which explains his campus accommodations: A 1994 Ford Econoline van.

Purchased last spring for $1,500, the van is comfortable enough, Ilgunas says. He parks near college housing to avoid unwanted attention, uses a sleeping bag in back, cooks on camping equipment and showers in the university gym.

In a recent column for salon.com, Ilgunas described his van-home as a "grand social experiment," an adventure akin to Thor Heyerdahl's Kon-Tiki and Henry David Thoreau's Walden.

"I wanted to see if I could — in an age of rampant consumerism and fiscal irresponsibility — afford the unaffordable: an education."

Ilgunas told the Charlotte Observer's Eric Ferreri that the nearest bathroom is a quarter-mile away, but that he has no problem enduring the night.

Although Ilgunas is concerned campus security might evict him — or worse, force him into pricier student accommodations (where he'd be required to pony up for a rug "to tie the room together"), a Duke official told the Observer that, while the university doesn't encourage Ilgunas' "creative" housing choice, the van-dorm doesn't violate campus rules.