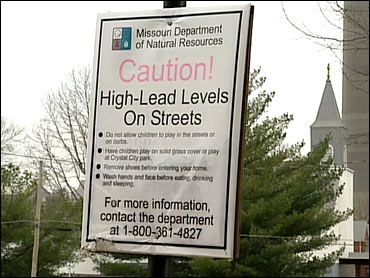 Last year 60 Minutes II visited a place where, for almost a year, people had been told just that.

The town is Herculaneum, Mo., home to the Doe Run Corporation, the nation's last primary producer of lead.

The Centers for Disease Control considers lead to be the greatest environmental health risk to children. It is so dangerous to young kids, whose brains and central nervous systems are still developing, that 30 years ago it was banned from paint and gasoline.

Until recently, the 2,800 residents of Herculaneum were virtually raised on a diet of lead. Correspondent Vicki Mabrey reports.

Wherever you look in Herculaneum, the view is dominated by the Doe Run Corporation's smokestack. For 110 years, it's been a major producer of lead for everything from bullets to car batteries to X-ray shields. That's why the town was named after the lead-making center of ancient Rome. But modern-day residents say it should be called Leadville.

Residents recall times when smoke from the smelter was so thick they couldn't see across the street. But Jack Warden, like most everyone else in Herculaneum, trusted that it wasn't harmful. But in August of 2001, he became suspicious of a powdery dust that was accumulating on city streets.

State officials tested the dust he collected, which had fallen off company trucks, and found arsenic, cadmium and concentrations of lead equal to what you'd find in a lead mine - 300,000 parts per million, 750 times the hazardous level.

"I was floored," says Jack Warden. "I mean I was expecting it to be high, but nothing like that." Worried that the whole town was being poisoned, he began using a simple test kit to check for lead.

The Environmental Protection Agency also began doing extensive testing and found some of the highest lead levels ever seen in the country. Some homes had carpets and attics measuring 240,000 parts per million – 40 is considered unsafe. Herculaneum was classified an "urgent public health hazard."

Robyn Warden thought Herculaneum was a safe place to raise her children, until her brother-in-law, Jack, warned her of the danger.

"When I found out that they were releasing toxic emissions by the tons per year, then yes, I was very concerned," says Robyn Warden, who lives one block over from Doe Run Corporation. "You know, I pretty much barred up my windows and doors and nobody was allowed to play outside anymore, and we were all pretty much captives in our house for a long time."

Instead of shutting down the smelter, state officials decided to shut down Herculaneum. In September 2001, signs went up telling parents not to let their children play on streets and city parks. Residents were also given rules for living with lead.

This wasn't a normal life. "Not even close to normal life," says Robyn Warden. "But that's the normal life of a person that lived in Herculaneum."

Despite all these precautions, her two children were chronically sick. She had them tested and found they had severe lead poisoning. Aaron's level was 24, Grace's was 44. The CDC limit is 10 -- anything above that can cause stunted growth, kidney failure and irreversible brain damage.

"I wanted to scream when the kids' levels were just through the roof," says Robyn Warden.

She wasn't alone. Of the children who were tested in 2001, 17 of them – more than half of the preschool-age children living closest to the smelter - had elevated lead levels.

In September of that year, a federal health agency conducted an isotope test on the Warden children, a test that accurately identifies lead by type. The test proved conclusively that their contamination came straight from Doe Run Corporation. The Wardens have filed suit against the company.

In an interview in May 2002, Doe Run CEO Jeffrey Zelms told 60 Minutes II that the company has been working hard to improve conditions in Herculaneum.

"We don't run away from our responsibilities in terms of the reduction, elimination of the emissions out of that facility," says Zelms. "In the last 20 or 30 years, we have hammered on that rigorously. We have spent hundreds of millions of dollars in pursuit of that."

In January 2002, Doe Run finally met the ambient air standard, and they've met it for four of the last five quarters. A major cleanup is now under way, but there's still a lot to be cleaned up from 100 years of contamination.

But oxygen and table salt aren't on the EPA's list of toxic substances. Lead is. Now, hundreds of residents have hired attorneys to sue the company, and are seeking millions of dollars in damages. Those residents claim the company knew decades ago, from its own studies, that there were extremely high levels of lead contamination all around town. They say the company failed to warn them of the risk to their kids.

"The community has a legacy of lead," says Steve Mahfood, director of Missouri's Department of Natural Resources, the top environmental agency. Looking back, he says it's surprising that state health officials did so little, even though there were studies over the last 20 years showing high levels of childhood lead poisoning in the town.

Was this a triumph of politics over public health?

"I'd have to say realistically that was probably part of it. It was a company town, it was a town that was dependent on the Doe Run Company and their predecessors for their jobs," says Mahfood. "I think people very strongly found themselves in denial over some of these issues."

Herculaneum used to be a company town, back when the smelter employed most of the residents. Now it employs fewer than a dozen, and attitudes have changed.

Residents are angry that they were kept in the dark – and afraid that as a result of lead, their town may have a higher incidence of Lou Gehrig's Disease and Multiple Sclerosis. The CDC is also investigating to see if there is in fact a higher than normal incidence of these diseases in Herculaneum.

Not everyone in town, however, thinks the smelter is a threat.

"I've been here 63 years and my grandkids that live here in town is the fifth generation of Donnellys. And I have never in my life recall a lead problem in our my family," says local barber Jim Donnelly.

"I think that anyone that takes care of themselves, does the proper thing, washes their hands before they eat and different things like that, shouldn't have any problems," adds Charlie Sims, who retired from Doe Run.

Zelms told 60 Minutes II that he's living proof that maybe lead's not so bad for you after all.

"I was the kind of boy that went fishing with lead sinkers, and crimped them on the lines with my teeth," says Zelms. "I rode in an automobile that burned leaded gasoline. I ate stewed tomatoes out of cans that had leaded seams. I brushed my teeth with toothpaste that I squirted out of a lead tube."

A recent study in The New England Journal of Medicine reports that children are in danger of that damage with even the most minimal exposure to lead. This is why Doe Run has been required to thoroughly clean the town, even replacing the soil in 95 percent of the yards within a mile of the smelter. So far, they've replaced the soil in about one third of the yards - the ones with the highest level of lead contamination.

But Mahfood says the only truly safe way to solve this problem is to move the people. As a result, the state has convinced Doe Run to buy 160 of the homes closest to the smelter by the end of 2004. As of last month, 21 families have accepted their offer.

But not everyone has that option. The buyout zone, negotiated by Doe Run and the state, is only 3/8th of a mile. It doesn't include all of the homes where young children have elevated lead levels – like Carol Miller's house, which 60 Minutes II visited last year.

Miller has also filed suit against Doe Run. "We should've been in the buyout zone, too, you know and wherever they draw a line, there's going to be a mother on the other side saying, 'Why not my kids?'"

The state admits Doe Run is making progress, and last summer, after ten months, those warning signs came down. But officials say if Doe Run doesn't continue to meet the emission standard, the smelter could still be closed.

Robyn Warden fought Doe Run independently and got them to buy her house. She moved to a town 15 miles away, and her children's lead levels have dropped in half.

Zelms told 60 Minutes II recently that Doe Run has made "Herculean progress in Herculaneum" – and a health analysis done by the Missouri Department of Health suggests he might be right, as the percentage of children with elevated lead levels has declined dramatically.

No new cases of children with elevated blood lead levels have been reported this year. And state health officials say this suggests the risk to children in Herculaneum is lower, but it remains, they say, unacceptable.