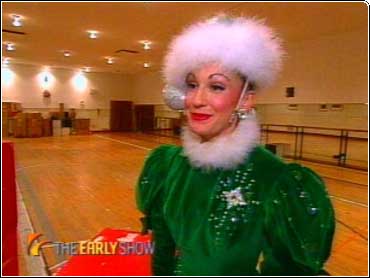 Glamorous, beautiful and the public just can't get enough of the them. The Radio City Rockettes are the world's most famous precision dance team.

"You step out there, and you look out into the crowd and the lights and the music, you just get caught up in it," explains Arauz.

What about all the applause and the adoration?

Arauz began dancing at the age of 5. She never imagined she would become part of the legendary dance team that's been performing here since 1932.

"I screamed as soon as I got the phone call. I was very surprised because it was a dream come true," Arauz recalls.

The Rockettes make it look easy, but they perform a grueling 200 shows in two months. Arauz dances up to 10 hours a day and then heads to her other job. She runs her own feather business.

The Rockettes Christmas show runs from November to January. So the rest of the year, Arauz sells boas, masks and headdresses to designers.

"I sell to a lot of designers like Betsey Johnson and Bob Mackie for his gowns," says Arauz. She shows a soft, furlike feather that she says was Marilyn Monroe's favorite. "It's called the swan boa, but it's actually turkey marabou."

Arauz' feathers even trim the costumes of the Rockettes.

While Arauz put her guest through the paces of precision dance, she revealed the Rockettes' secret: They never touch each other on the back. Keeping their balance on their own helps the Rockettes achieve that seamless look.