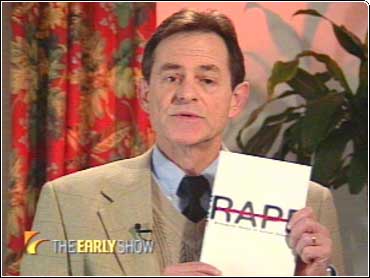 A new book that examines what causes men to rape is not even out yet, but has already created an uproar, reports CBS News Early Show Anchor Bryant Gumbel.

Randy Thornhill and Craig Palmer, author of A Natural History of Rape, suggest that rape is a male reproductive behavior that has evolved over time. Thornhill is an evolutionary biologist and Palmer is a professor of anthropology.

Their basic contention is that rape, while inexcusable, must be viewed as a natural biological phenomenon for which there's some evolutionary explanation. Gumbel asked the author what that explanation entails.

"Well, unfortunately, it is a fact that one characteristic of our species is that some men sometimes rape," said Palmer. "If you accept evolution and you accept the notion that we, as a species, have evolved to be the way we are, therefore there is an evolutionary basis to rape."

Palmer says that, in the book, he and Thornhill try to identify such an evolutionary basis, and find two likely possibilities.

One is that rape itself was favored by national selection - that is, that males in populations who committed rape under some circumstances had greater reproductive success than other males.

Another possibility, say the authors, is that rape itself is not an adaptation, but a by-product of other aspects of human sexuality.

Gumbel asked Thornhill to finished this sentence: "Rape, as we know it today, is the result ofÂ…"

According to their theory then, Gumbel asked, are all men potential rapists?

"All men are potential rapists in the sense that all men receive at conception, the genes that, if Â… these genes interact with certain specific environments that can be identified through our evolutionary approach, such men will be prone to rape when thy become adults," said Thornhill.

But Patricia Ireland, president of the National Organization for Women (NOW), says the authors base much of their theory on the behavior of insects instead of accounting for the complex behavior that comes from human sexuality.

"In doing so," she said, "they argue that they're trying to find solutions to the problem of rape. They say that women should not dress or act provocatively and that we should teach young boys that Darwinian selection means they're going to be liable to be tempted to have sex with women who say no. The notion that rape is a sexual, a reproductive, or evolutionary, adaptation for men who can't get women voluntarily, would lead to strange conclusions."

What about the basic contention that, since evolution plays a role in every living thing, it is rational and understandable that it would play a role in rape?

Said Ireland, "There's no question that, absolutely, evolution has an impact on all of our behavior. But sexual behavior is much more complex than just an evolutionary desire for men to spread their genes. In fact, if that were the truth, then perhaps the way to avoid rape is to provide women to these men so they would haven't to rape, and yet we know (rape) has a heavy content of violence Â… even though that's acted out sexually."

Turning to Palmer, Gumbel asked if those people are wrong who have long contended that rape is a crime of violence, not sex.

"Yes, I think they are," said Palmer. "I think when talking about that, you need to distinguish what is the motive or what is the goal, what is the sensation being sought by rapists, and keep that distinct from what is the ruse used to attain that.

I suggest that always one of the goals that rapists are after is some type of sexual stimulation," he continued. "They may have many other goals, but for it to be rape, the sexual goal must be there. Where the violence comes in is, you have to have violence as a tactic to obtain that goal before you call it rape. I think we need to separate the means from the end in talks about the way sex and violence goes together."

Emphasizing that the book does not condone rape and does say it's disgusting and inexcusable, Gumbel asked if, continuing by the authors' logic, does it follow someone might view rape as somehow the ultimate macho act?

Replied Thornhill, "Potentially so, but not someone who is informed of how science plays a role here." Holding up a copy of the book, he added, "In our book, A Natural History of Rape, we discuss all these points in great detail."

NOW president Ireland interjected, "Let me just suggest, Bryant, that they have a theory that they're trotting out as scientific truth. Any evidence doesn't fit with their theory, they blow off. For instance, men have raped young children, elderly women, men in prison, and they simply blow that off as saying men are relatively more indiscrminate in their sexuality and of course they start having sex with farm animals and others who can't reproduce in the human way. I think it leads to some very bizarre conclusions."

Did Thornhill and Palmer expect their book to cause an uproar?

"Yes, we anticipated controversy," said Thornhill. "We are very happy, however, that in our book, we cover all the criticisms in great detail, and place them in scientific perspective. All the criticisms that have been voiced to date."

Shot back Ireland, "And, most of them, they blow off as politically incorrect."

Responded Thornhill, "No. There's no blowoff. That's important to understand. These exceptions, so-called exceptions, just mentioned by our critic here are not exceptions at all. The idea that men's sexuality has evolved to be relatively indiscriminate, compared to female sexuality Â… is consistent with men raping other men, with men raping children."

"It's a long leap from indiscriminate to that," countered Ireland, as Gumbel called an end to the debate as they ran out of time.