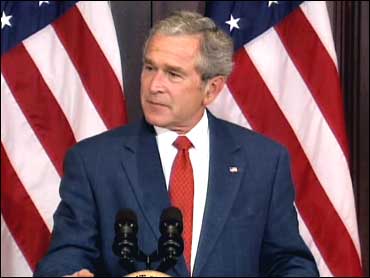 
Hell is freezing over.

Quite frankly, the very idea of this president talking about that subject seems about as likely as, well, the polar ice caps melting, or hell freezing over — and we know for a certainty that one of those things is happening.

From the same administration that KO'd the Kyoto accords, and earlier this week shouted "nein" to German Chancellor Angela Merkel's EU plan to reduce carbon emissions, comes word that the White House takes the issue of climate change seriously.

When was the epiphany? Is the president going to start driving a Prius? Have the folks in Texas heard about this? Green has long been popular in the blue states; does this mean red and green go together now, too?

I warn you, Mr. President, this eco-consciousness stuff is a slippery slope. Soon you'll be recycling, and if you don't watch out, you'll start hankering for organic food. Might even become a vegan.

Yeah, when hell freezes over.