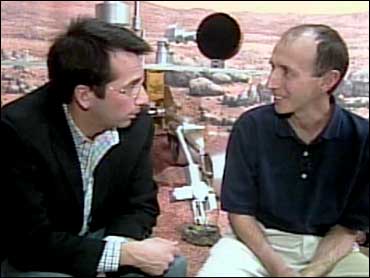 The Mars Rover, which just began roaming over the Martian surface, is an amazing feat of technology.

The Early Show's Dave Price went to NASA's Jet Propulsion laboratory recently for a close-up look at a vehicle just like the one that right now is exploring the Mars.

Pointing at the top of the Spirit rover, Dr. Matt Golombek, Price's tour guide, said, "It's called the mini thermal emissions spectrometer, to look around at all these wondrous rocks out here".

He said it took three years to research possible landing sites: "The two that were selected were Gussev, which is where Spirit landed, and the second one is Meridioni."

Golombek noted the rover is sensitive to winds. "This thing is subject to the winds in the final few kilometers of the atmosphere," he said, "This can pivot in a number of ways, so it can go over large obstacles."

Claiming the scientific talk sounded like mumbo-jumbo, Price asked whether the NASA staff kicked the Rover's tires before sending it off into space.

"I have absolutely no idea," Golombek answered. "Engineers kick tires. Engineers build it. The scientists know about Mars."

To find out if he was talking to right person, Price asked Golombek for his official title. "Martian," Golombek answered tongue-in-cheek. Seriously, he said, he is a planetary geologist.

So Price's next question was, "Do you ever have to do anything from the ground, like its version of going to Amoco, to get the transmission adjusted or something like that?"

Golombek replied, "Do you have a service station on Mars?"

Since there isn't one there, Golombek joked, "Well, then we couldn't do that."

Price's conclusion, "These scientists are very snarky, aren't they?"

Better received was Price's question about whether the rover is an all-wheel drive vehicle.

"Yeah, all-wheel drive, and four steering wheels," Golomberk answered. Getting on his knees and looking under the rover, he added, "You see this whole rocker bogey is attached in this one point. That's what gives it great mobility."

So what would he do if the whole thing breaks down?

Will scientists find water there? "I'm not a for-seer," said Golombek. "I'm a scientist. You don't know until you try it."

He added, "If we found a carbonate, that would tell us that all the things you needed to form life existed on Mars at a time when life started here on Earth."

And that is spectacular because he said , "it addresses the most fundamental question that a scientist can ask: Are we alone in the universe?"

Asked if he feels a little like Newton or Vasco da Gama or Christopher Columbus? Golombek said, "Yeah, I'm an explorer. Absolutely. That's what I do, I explore Mars"

And that he says is, "Totally cool."

The rover is not exactly a roadster. It's set to travel only 40 meters a day, and if all goes well, it'll keep beaming back those spectacular pictures for the next three months.

Scientists are pretty excited, and they're already dreaming of human exploration.