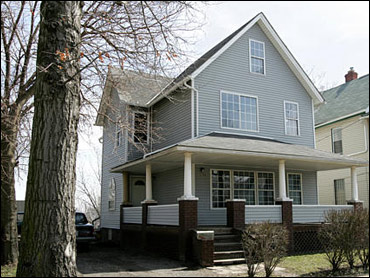 The home where the classic holiday movie "A Christmas Story" was filmed has been purchased on eBay by a California man for $150,000.

Brian Jones could not resist when his wife told him eBay was offering the Cleveland home where the film family lived in the 1940s and the main character, a boy named Ralphie, daydreamed of shooting bad guys with a BB gun he hoped to get for Christmas.

Jones, 29, of San Diego, plans to restore the home's exterior to the deep yellow with green-trimmed windows it had in the movie and revamp the interior to resemble its movie appearance.

He also wants to create a museum in the home and open a gift store selling items linked to the movie, including Ovaltine, Little Orphan Annie decoder rings and "leg lamps" like the one Ralphie's father proudly displayed in the front window of his family's house.

Two years ago, Jones started a Web site and began selling 45-inch-tall lamps of a woman's leg in a fishnet stocking and high-heel shoe.

"A Christmas Story," is based on the writing of Jean Shepherd, who died in 1999.

The movie was filmed in 1983. It is Warner Bros. Entertainment Inc. property, and the National Entertainment Collectibles Association, in Clark, N.J., holds a license for marketing products from the film, including the lamps.

Warner Bros. had no comment on Jones' museum proposal or any property rights involved, a studio spokesman said last week. NECA did not respond to a message last week.