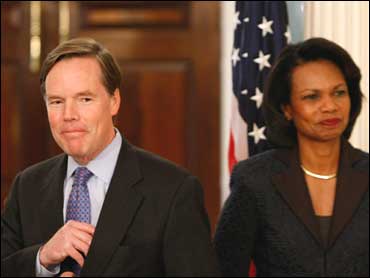 R. Nicholas (Nick) Burns, career foreign service officer and self-described super fan of Red Sox Nation, is giving up one of his passions - and it is not his love for the Red Sox.

In announcing Burns' departure as Under Secretary of State for Political Affairs, his boss and close friend Secretary of State Condoleezza Rice wryly noted, "Well, I knew nothing good would come of the Red Sox winning (the World Series) again..." More seriously, Rice called Burns' decision to leave government "bittersweet."

One of the State Department's fastest-rising diplomats, Burns, having spent 26 of his 51 years in the foreign service, decided it was time to meet family needs and "to pursue other ventures outside the government," although he too called it a "bittersweet" day. Besides jobs in Washington, Burns has previously served in posts in Africa, the Middle East and Europe.

A protégé of Rice's, Burns served with her at the National Security Council under President George H. W. Bush. His current job is the third highest-ranking post at the State Department.

Prior to those posts he also was the spokesman of the department and he had no problem mixing diplomatic messages with his love of the Red Sox. Burns once used the podium at the State department to call Roger Clemens a "traitor" for trading in his Red Sox uniform for one worn by the Toronto Blue Jays.

It can safely be said that there is probably no corner of the world Burns does not have some familiarity with, and much of that knowledge came from his stint as spokesman (1995 to 1997) when he held daily briefings for the press and traveled the world with Secretaries of State Warren Christopher and Madeleine Albright. Much of his work during that period was devoted to the war in the Balkans.

After Burns left the podium he served as U.S. Ambassador to Greece (1997-2001) and then NATO. In his current job, Burns has focused most closely on working out a civil nuclear agreement with India and on efforts to pressure Iran into abandoning its nuclear weapons program.

Occasionally sniped at by some of his colleagues (who never wanted to be quoted by name) for being too much of a self-promoter, Burns also has no shortage of backers other than Rice. Ambassador Patrick Kennedy, now Under Secretary for Management, has known Burns for 20 years and says "he did rise fast" and that he certainly has benefited from "situational luck," which Kennedy defines as "being in a place where an opportunity presents itself but you have to have the drive ... to make the most of it." But Kennedy says, "I don't see him as a self-promoter."

Aaron David Miller, a former colleague, worked with Burns on Middle East peace issues. Miller calls the outgoing envoy "a consummate professional" who is "impassioned and genuine defending Rice as Secretary of State."

With less than a year left in this administration's term, some wonder why Burns would choose this time to leave, especially since the India nuclear agreement is not yet finished and the Bush administration is in the process of trying to get a third sanctions resolution on Iran through the U.N. security council. Detractors say Burns' departure might indicate an acknowledgement that the India deal might not go through and that another sanctions resolution might be too watered down. But Patrick Kennedy has a different take: "Foreign service people work on tough issues and work on them for years. One doesn't expect ... to bring every issue to fruition."

Whatever the real story behind his departure, it is a safe bet Nick Burns and his family will be seeing more Red Sox games next season than they have in years.