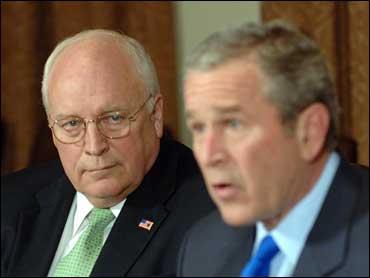 This column was written by Katrina Vanden Heuvel.


On Meet the Press Sunday, Senator Russ Feingold, D-Wis., announced that he will be introducing two censure resolutions in the next few days, aimed at holding President Bush, Vice President Cheney and other administration officials responsible for the damage done to our country — weakening our security by misleading us into the disastrous war in Iraq and shredding our Constitution.

When "Meet the Press" host Tim Russert asked, "Isn't this futile?" (sounding every bit like the arbiter of inside-the-beltway realism that he is), Feingold spoke eloquently of the need to set the historical record straight. What message does it send, he asked, if elected representatives do not hold accountable a President and Vice President who have used mistruths, spin, manipulated intelligence reports and fear to drag this country into a war that is the most colossal foreign policy mistake in our history? What message does it send if we do not hold them accountable for weakening our security through relentless assaults on the rule of law on which our country was founded?

History must therefore record, Feingold argued, that when faced with an administration which doesn't recognize or respect the separation of powers, which perpetually acts as if the executive branch is above the laws of our nation, the people and their elected officials stood up and demanded accountability.

While Feingold believes that Bush and Cheney have committed what our Founding Fathers would have thought of as "high crimes and misdemeanors," at this time he does not believe it is in the nation's best interest to put important issues confronting our country on the back burner to go through months of a divisive impeachment process. That is a view shared by many progressives.

At the same time, however, a growing majority of the country disagrees — in fact, a majority believe Cheney should be impeached. And many progressives as well as conservatives — including Bruce Fein, former Reagan Justice Department official — make a coherent and impassioned case for the value of pursuing the impeachment process. The case for impeachment was given the airtime it richly deserves in an extraordinary July 13 Bill Moyer's Journal, program featuring The Nation's John Nichols in conversation with Fein.

Feingold needs citizens' help to develop and push these resolutions forward. E-mail your representatives, bombard them with your appeals and demands that they stop this White House from shredding the Constitution and, as Feingold puts it, "thumbing their noses at the American people."

By Katrina Vanden Heuvel
Reprinted with permission from The Nation