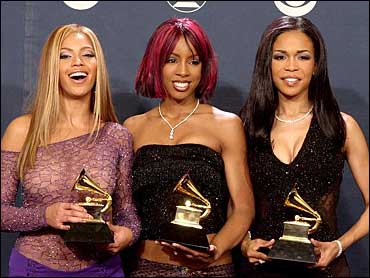 Read an excerpt from "Soul Survivors: The Official Autobiography of Destiny's Child."

The members of the group are:

Knowles and Rowland are childhood friends and the founding members of the group. Williams joined the group in February 2000.

Since their debut in 1997, the group has changed. Originally, it consisted of Beyonce' Knowles, Kelly Rowland, LeToya Luckett and LaTavia Roberson. Luckett and Roberson were replaced in February by Farrah Franklin and Michelle Williams. Farrah Franklin has since left the group.

Only three years ago, the group began to attract a loyal following in Houston, opening for R&B and hip-hop acts such as Immature, Dru Hill, Das EFX and SWV prior to landing their own record deal.

The group says their name came from the Bible. Knowles says, "We got the word destiny out of the Bible, but we couldn't trademark the name, so we added child, which is like a rebirth of destiny."

They have sold over 15 million albums and singles worldwide, including 9 million copies of the album The Writing Is On The Wall (seven million in the US alone). For the first year of its release,The Writing's On The Wall spent 47 out of 52 weeks in the Top 40.

In addition, they have won:

The NAACP Image Award for Outstanding Duo or Group

Billboard magazine's award for 2000 Artist of the Year

Sammy Davis Jr. Award for Entertainer of the Year at this year's Soul Train Music Awards.

At the Grammy Awards this year, Bono from U2 declared that he is a new member of the Destiny's Child fan club and they are up for the job of best band in the world.

The group has contributed music to the hit soundtracks for Men In Black, Romeo Must Die, and Life.