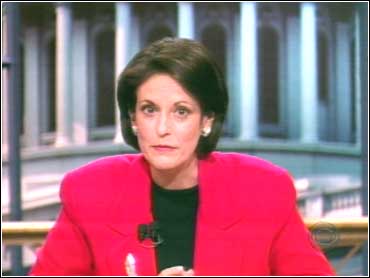 Gloria Borger, U.S. News & World Report and CBS News Special Correspondent, has been working the James Jeffords party defection story. She took some time out to brief CBSNews.com on what it all means.


Borger said the White House needs to step back and take a look at how it's governing. By catering to the hard-core conservative Republicans, the White House has ignored the small, but influential band of moderates. As a result, the moderates feel completely marginalized. They don't feel like they've been consulted about issues or that their ideas matter.

Jeffords probably felt left out of the process, Borger said, particularly as chairman of the influential Health, Education, Labor and Pension Committee. Many of the president's goals have to go through this committee and Jeffords was not in the loop; the White House simply went around him to broker with the conservatives. Moderate Republicans have told Borger they were bothered by this maneuvering and are having a hard time dealing with the Bush White House.

The moderates also told Borger that the White House must pay more attention to them - that they are the true Republicans. "We are the Party, we have not changed," they said. They are concerned that the White House is governing as if it had a clear mandate, which with a divided country, and a very divided Senate, it doesn't. These moderates feel particularly left out on issues relating to the environment, health and education.

Borger also said that the Democrats have done a better job of keeping their side together, while the Republicans, as a result of their infighting, have not been able to provide a united front in their battles.

Asked if she thought any other senators would defect, Borger said it was hard to say, but that she somewhat doubted it. It's a very tough decision to leave your party, she said, and not many do it. For example, she doesn't see Democrat Zell Miller of Georgia becoming a Republican, as many Republicans hope, although she did say he might become an independent. Borger said she could only imagine the depth of Jeffords' feelings about leaving his party, particularly because his defection affects control of the Senate.

Jeffords is a "policy guy," she went on. He's concerned with issues - particularly special education and the dairy industry - as opposed to power. He would not make a move like this without careful consideration of all the ramifications.

Asked how this decision would play out in Congress, Borger said it was a very big deal. She thought the change in the balance of power probably dooms programs like missile defense, and increases the likelihood of more prescription drug and health care bills being passed.

And while she doesn't think the Democrats will pull the tax bill, she does think it may be altered.

As for the Democrats taking control of the Senate, Borger said one cannot underestimate the importance of having an outright majority. With th Senate divided, there has been a tug of war over the agenda. Now that the Democrats will be in the majority, they will have complete control over the schedule and which issues should come up for a vote. That power should not be taken lightly, she said.

"This is going to kill the White House and the Republicans," Borger said, adding that Sen. Trent Lott will not be "a happy camper" over losing his position as majority leader.

Borger said she hadn't seen much comity in Washington over the last several months. Partisan bickering is at the highest level she's seen. And she doesn't see it getting much better. Democrats say they've been mistreated by Republicans; Republicans say the same about Democrats. And the tit-for-tat atmosphere will likely continue.

Borger added that while President Bush may have wanted to change the "tone" in Washington, she didn't think he meant it quite this way.