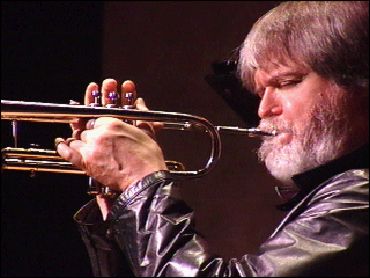 Tom Harrell, named jazz trumpeter of the year three times by Downbeat Magazine, is known for the gorgeous, intricate melodies he composes.

Seeing Harrell play, it's impossible to believe that he suffers from paranoid schizophrenia - a mental illness so profound that it institutionalizes many of its victims.

Harrell overcomes it with music. Yet the moment he stops playing, his disorder seizes him. Voices materialize and threaten his sense of reality.

But while Harrell appears in full retreat from the world, the music prevents him from losing his place. And when horn returns to mouth, the voices vanish. It’s the only time you don’t see the signs of his illness. Correspondent Charlie Rose reports.

Take him away from the creative process and Harrell’s behavior changes radically.

In fact, the schizophrenia makes something as ordinary as having our soundman put a microphone on him an ordeal. But soon, the moment passes.

“As long as I take the medicine now, I can stay on an even keel, and then I'm able to function,” says Harrell, who communicates musically, not verbally - which is all his band members need to follow him during performances.

Still, they have all borne witness to his paranoia.

“I think we see it all the time. He doesn't announce it, say, ‘I'm sitting, I'm hearing voices,’ you know. They'll be sudden changes for no apparent reason,” says pianist Xavier Davis.

“But maybe someone mentioned someone or whispered something just out of earshot, and he heard that as something like, ‘Tom, get off the stage. You suck.’ You know, like just something that was never said. And so, maybe he’ll just take a short solo because he thinks people don’t want to hear him play.”

But Harrell wasn't always like this, says his older sister, Sue Abrahamson.

“He was good-spirited, creative,” says Abrahamson. “He had friends that he would do things with and hang out with. And seemed pretty normal.”

Normal, but with a genius IQ, Harrell starting playing the trumpet at the age of eight. When he went off to college at 18, his sister received a call that he had tried to commit suicide.

“That was the first sign that there were problems,” says Abrahamson.

How could a seemingly normal little boy with a normal childhood travel from happiness to despair so suddenly?

“We don't know what causes the illness,” says Dr. Eric Marcus, a New York psychiatrist and psychoanalyst. He’s familiar with Harrell's history and is an expert on schizophrenia.

“A paranoid schizophrenic is someone with schizophrenia whose major manifestation of illness is the hallucinated voice and/or belief that people are out to get him - that they are targeting him in some way,” says Marcus.

When Harrell was in his 20s, those voices ordered him to walk through a window after he had some orange juice.

“I come in and I see blood all over the rug, and I say, ‘What happened,?’ And he said that when he drank the orange juice, the voices told him to go out the window,” recalls Abrahamson. “And so he had to break the window to get out. So that's how he got cut.”

The glass shattered, but it kept him inside.

Harrell's days are spent practicing and composing. He writes his scores by hand. The notes are neat, logical, orderly - not what you'd expect from someone locked in the vise of schizophrenia.

Because of his disorder, Harrell is tough to interview. But when the topic is music, he takes complexity in stride.

“That's beautiful, how you can see the visual art. I mean it's great when the different art forms can influence each other. The visual arts and now the musical arts,” says Harrell, on the crossover between impressionist painting and jazz.

But when the talk turns to Harrell's illness, he becomes uneasy. He takes three medications that stave off depression, reduce panic attacks, and sedate him. Without them, he turns psychotic. Even with them, performing is an act of will.

“If I take the medicine, then the voices … I don't hear anything,” he says.

And if he doesn't take the medicine?

Marcus says it’s astounding that Harrell is able to reach the level of creativity he reaches as a musician.

“Astounding, number one. Number two, heroic - in its most true form,” says Marcus. “He has to face demons that you and I can only imagine.”

But it's not only music that holds Harrell together. It's Angela Harrell, his wife of 11 years. Angela was researching a documentary for Japanese television on creativity and the brain, which led her to tape an interview with Tom.

But from this unpromising beginning came marriage.

“I think I was drawn to him immediately,” says Angela. “He was intriguing. He was mysterious. And it was sort of like unfolding, you know, petal by petal. I wanted to know this person. But the more I knew about him, the more I got to like him … This purity of spirit. He's a beautiful person. There's nothing not to like about the guy.”

Although their devotion is mutual, getting pictures of them together is hit or miss. Tom wouldn't take a walk with Angela because, he said, somebody might see him.

Was there ever a moment during their courtship when Angela asked herself, “Wait a minute, what am I doing here?”

“I didn't have these thoughts until some of the problems occurred, some of the crises that we've experienced,” admits Angela.

Those crises included sudden disappearances, rapidly changing mood swings, a suicide attempt, and a toxic reaction to a medication that almost killed Harrell.

“Those are times when I've asked myself some of those questions,” says Angela. “But never, ‘What am I doing?’ But always, ‘What can we do, and is there hope?’"

She’s says that she’s always come to the conclusion that you can’t give up. "You just have to keep trying,” she says.

Trying is one thing, but succeeding is another. How to explain the mysterious explosion that blasts through Harrell's illness and transports him to the highest level of his art?

A clue may come from Harrell himself: "I don't know whether I'm playing the music or whether the music is playing me."

Harrell's latest CD will be released this September.