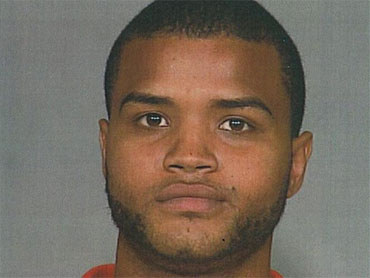 Police have arrested a ninth suspect in the anti-gay attack and torture of two teenage boys and a 30-year-old man in New York. Police say members of the Bronx violent felony squad arrested 22-year-old Ruddy Vargas-Perez shortly before 5 p.m. Monday.

It wasn't immediately clear where he was arrested. Vargas-Perez had agreed to turn himself in, but police say the suspect had failed to show up before as promised.

Eight other suspects were arraigned Sunday on robbery and sexual assault charges in the Oct. 3 attack. Vargas-Perez did not have a listed telephone number.

Police say Latin King Goonies gang members went on a rampage after learning the 30-year-old man had sex with a teenage recruit, and beat and tortured all three for hours.

Gang members used an anti-gay slur to ask two teen boys and a 30-year-old man about their sexuality before brutally torturing and beating them last week in a working-class Bronx neighborhood, authorities said in court, where eight suspects stood with drooped heads at their first appearance as their relatives wept behind them.

During the proceeding Sunday, Assistant District Attorney Theresa Gottlieb said that each victim was asked prior to being beaten in the Oct. 3 attacks: "Is it true that you're a fag?"

The defendants did not enter pleas to charges that include robbery, assault, sexual abuse and unlawful imprisonment as hate crimes. The most serious charge carried a potential 25-year prison term. Police were looking for a ninth suspect, who had been expected to turn himself in but didn't show.

The nine men, members of the Latin King Goonies gang, had heard a rumor one of their teenage recruits was gay and on the night of Oct. 3, found him, stripped and beat him and sodomized him with a plunger handle until he confessed to having had sex with a man, police say. The gang members then found a second teen they suspected was gay and tortured him, police say.

They also invited the man the first teen had admitted having sex with to a house, telling him they were having a party, police say. When he arrived, five of them burned, beat and tortured him for hours, police say.

The man was sodomized with a miniature baseball bat by a defendant who taunted him with, "You like that. You like that," the criminal complaint said.

Two of his attackers went to his home, court papers and authorities said, where they encountered the man's brother. They punched him, bound his hands with rope, put tape around his head before and threw a mattress on top of him, authorities said, and demanded money and jewelry and threatened him with death before leaving with cash and a 52-inch flat-screen television.

Bronx Criminal Court Judge Harold Adler set bail for Peitars and Caraballo at $100,000 bond or $50,000 cash; the other six were held without bail.

Two attorneys, Paul Horowitz and Fred Bittlingmeyer, represented the eight at the hearing but didn't expect to represent all of them through the legal process.

Bittlingmeyer, representing Peitars, said his client only punched one of the complainants after the other defendants said they "were going to find out who the men are in this room and who the fags are in this room."

Bittlingmeyer said if Peitars didn't throw a punch he would have been attacked himself. He also denied it was a scheme by a gang, describing it as people getting together on a Sunday night and "one individual let it get out of hand."

Horowitz, representing Caraballo, said his client had not previously been in trouble with the law and denies the allegations. He said the only offense of which Caraballo was accused was hitting one of the complainants with his fist.

Mayor Michael Bloomberg said he was sickened by the accusations of violence "and saddened by the anti-gay bias." The beatings in the Bronx followed a string of anti-gay attacks and teen suicides attributed to anti-gay bullying.

Gay men and women live openly in Morris Heights, the largely Hispanic neighborhood where the Oct. 3 beatings took place, and while residents were disturbed by some past violent behavior blamed on the defendants, some said they hadn't previously targeted homosexuals.

On Sunday, outside the four-story brick building where police say the assaults happened, a police officer was posted in three-wheeled scooter, and crime scene tape stretched across the bottom of it. Children played in the street in front of the home, which faces Primary School 226.

An assortment of colorful flowers were laid in front of the home with a sympathy card that read: "Prayers for healing - for our community."

Two blocks away, young men stood on the corner outside the building where the 30-year-old victim and his brother live in a fifth-floor walk-up. A sign at the building's entrance warned that it was patrolled by the police department's Operation Clean Halls.

In the deli on the main floor of the building, Jose Aurelio said the 30-year-old victim stopped in every morning on his way to the bus, often just to say hello.

"He comes here every day, happy, nice," he said. "Everybody liked him."