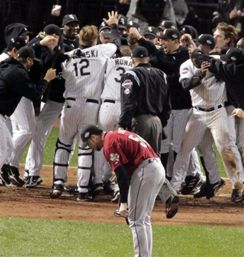 Scott Podsednik's home run was quite a surprise. Paul Konerko hits plenty of them. It took big swings from both to put Chicago in control of the World Series.

Now, two more wins and the White Sox are champions for the first time in 88 years.

After Konerko's go-ahead grand slam was offset by Houston's startling rally, Podsednik homered against Brad Lidge in the bottom of the ninth inning Sunday night to give Chicago a thrilling 7-6 victory over the Astros and a 2-0 lead in the World Series.

One shot came from a proven slugger who hit 40 during the regular season. The other from Podsednik, who didn't hit his first of the year until the playoff opener against Boston.

"Wow! He hit a home run off Lidge!" White Sox catcher A.J. Pierzynski said. "I'd like to take the odds in Vegas on that one. Put $100 on that and see what happens."

Konerko connected on Chad Qualls' first pitch after yet another questionable call by an umpire, this one a hit batter — and Jermaine Dye even later admitted that Dan Wheeler's pitch glanced off his bat. The slam erased a 4-2 deficit, sparking the crowd of 41,432 to life on a drizzly, dreary night, and capped a momentous week for Konerko.

"He's got nasty stuff, that guy," Konerko said. "He threw it exactly where I was looking."

A week earlier, Konerko was selected MVP of the AL championship series win over the Los Angeles Angels. Two days later, his wife gave birth to their first child, Nicholas.

It was Konerko's fifth postseason homer and the first Series slam since Tino Martinez hit one for the Yankees in Game 1 in 1998.

"It's the second-best feeling I've had all week," Konerko said. "The baby born Tuesday night ... that's first for the week."

When the Series resumes in Houston on Tuesday night, Roy Oswalt pitches for the Astros against Jon Garland.

"Well, we're certainly not in a good spot," Houston manager Phil Garner said. "We'll bounce back. We'll make a series out of this."

Rookie closer Bobby Jenks, who earned a save in Game 1 after not pitching for 14 days, couldn't work his magic two nights in a row.

Jose Vizcaino, pinch-hitting for Adam Everett with two outs in the ninth, reached the burly reliever for a two-run single and Chris Burke just beat Podsednik's accurate throw to score the tying run, slapping the plate with his hand.

That brought up Podsednik, perhaps the most unlikely hero. He didn't have a homer in 507 regular-season at-bats.

"I don't think anyone in the ballpark was thinking about me hitting the ball out," Podsednik said. "This one came at a good time."

Podsednik stepped to the plate with one out in the ninth against Lidge, who hadn't pitched since losing Game 5 of the NL championship series against St. Louis, when he gave up a mammoth three-run homer to Albert Pujols in the ninth.

This one wasn't as long, but it was just as damaging.

Podsednik lofted a 2-1 pitch to right-center, and players and fans craned to see whether it would clear the fence. When it did, for the 14th game-ending homer in Series history, his teammates poured out of the dugout to greet Podsednik at the plate.

"The best part is that he told me before the game he's going to hit a home run today and I laughed at him," Pierzynski said. "And he ended up doing it, to win the game in the bottom of the ninth."

Lidge gave up only five homers during the regular season.

"I'm frustrated by it, but I'm not changing a darn thing," he said. "I'm ready to get out there as quickly as possible."

Chicago pressured reliever Dan Wheeler on Juan Uribe's one-out double in the seventh and Tadahito Iguchi's walk, and the White Sox loaded the bases when Dye was awarded first base on a 3-2 pitch that umpires ruled hit his hand. Houston disputed the call and replays appeared to show the ball striking his bat.

"I thought in my heart I made the right call. I had it hitting him," baseball spokesman Pat Courtney quoted plate umpire Jeff Nelson as saying.

If it had been ruled a foul ball, the count would have remained full on Dye. But he went to first, Qualls relieved and he left his first pitch over the plate. Konerko turned on it, and it sailed deep into the left-field bleachers.

"I'm not going to tell him I fouled it off," Dye said. "Just go to first and, hopefully, we get a big hit and we did."

It was 45 degrees when the game began, weather more suited to football than baseball. While rain held off in the early going, it began again in the fifth, just before Berkman doubled down the left-field line to break a 2-2 tie. For the rest of the game, many fans wore slickers and held umbrellas.

Ensberg led off the second with his first homer since Sept. 20 at Pittsburgh, giving Houston its first Series lead. Willy Taveras tripled in the third and scored on Berkman's sacrifice fly, making it 2-2.

"It's a tough loss," Biggio said. "We've been through a lot of adversity all season long. We've been able to bounce back and come back."