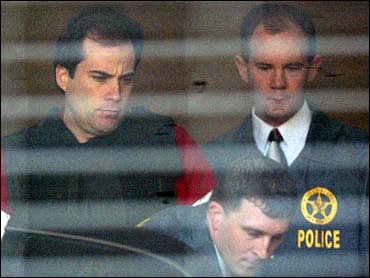 Right-wing extremist Eric Rudolph pleaded guilty Wednesday to carrying out the deadly bombing at the 1996 Atlanta Olympics and three other attacks across the South, admitting to one of the crimes with a hint of pride in his voice and a wink at prosecutors.

Rudolph, 38, entered his pleas during back-to-back court appearances — first in Birmingham, Ala., in the morning, then in Atlanta in the afternoon — after working out a plea bargain that will spare him from the death penalty. He will get four consecutive life sentences without parole.

The four blasts killed two people and wounded more than 120 others.

When asked in Atlanta whether he was guilty of all the bombings, Rudolph politely and calmly responded, "I am."

He offered no apology or explanation in either court appearance, but his lawyers said he would eventually release a written statement explaining how and why he committed the crimes.

"Because I believe that abortion is murder, I also believe that force is justified ... in an attempt to stop it," he said in a statement handed out by his lawyers after he entered his pleas in back-to-back court appearances, first in Birmingham, Ala., in the morning, then in Atlanta in the afternoon.

The security in Atlanta was boosted for Rudolph's appearance, reported CBS News Correspondent Cami McCormick. There was an extra courtroom where victims could watch the proceedings on a closed-circuit feed.

The statement marked the first time he had ever offered a reason for the attacks.

"The purpose of the attack on July 27th (1996) was to confound, anger and embarrass the Washington government in the eyes of the world for its abominable sanctioning of abortion on demand," Rudolph said in the statement, which quoted the Bible throughout.

"I am not anarchist. I have nothing against government or law enforcement in general. It is solely for the reason that this government has legalized the murder of children that I have no allegiance to nor do I recognize the legitimacy of this particular government in Washington."

The bomb that exploded at the Olympics was hidden in a knapsack and sent nails and screws ripping through a crowd at Centennial Olympic Park during a concert. A woman was killed and 111 other people were wounded in what proved to be Rudolph's most notorious attack, carried out on an international stage amid heavy security.

Rudolph also admitted bombing a gay nightclub in Atlanta, wounding five people, in 1997, and attacking a suburban Atlanta office building containing an abortion clinic that same year. Six people were wounded in that attack, which consisted of two blasts, first a small one to draw law officers, then a larger explosion.

At times Rudolph rocked in his chair, but otherwise sat stonefaced and stared straight ahead as federal prosecutors detailed the Atlanta-area bombings down to the brand of nails, duct tape and plastic food containers used to make the bombs.

In Birmingham earlier in the day, Rudolph pleaded guilty to an abortion clinic bombing there in 1998 that killed an off-duty police officer and maimed a nurse. A much more defiant Rudolph winked toward prosecutors as he entered court, and said the government could "just barely" prove its case if it had gone to trial.

With his head tilted back, Rudolph looked down his nose slightly as U.S. District Judge Lynwood Smith in Birmingham asked whether he detonated the bomb.

"I certainly did, your honor," Rudolph said in a tone that struck some victims as arrogant and proud.

With his admission, the nurse began weeping in the front row of the courtroom.

"He just sounded so proud of it. That's what really hurt," said Emily Lyons, who was nearly killed in the bombing and lost an eye.

Believed to be a follower of a white supremacist religion that is anti-abortion, anti-gay and anti-Semitic, Rudolph hid out after the attacks for more than five years in the mountains of western North Carolina, apparently using the survival skills he learned as a soldier.

He was captured in Murphy, N.C., in 2003, scavenging for food behind a grocery store, after becoming something of a folk hero to some people in the countryside for his ability to elude an all-out manhunt by the government.

Deborah Rudolph, the ex-wife of Eric's brother Joel, said Rudolph is hardly getting off easy. She said being kept in solitary confinement with only one hour a day of fresh air is a fitting punishment for an outdoorsman who hated the government.

"Knowing that he's living under government control for the rest of his life, I think that's worse to him than death," she said from her home in Nashville, Tenn.

The husband of the one woman who died in the Olympic Park blast says he's satisfied with the plea deal Rudolph has reached with prosecutors because it led to the discovery of more explosives and might have saved more lives, McCormick reports.

As part of the plea agreement, Rudolph told authorities where to find more than 250 pounds of dynamite buried in North Carolina. The government said some of the explosives were near populated areas and could have become unstable and blown up.

In court in Birmingham, he drummed his fingers on the side of a lectern as a prosecutor told of the Wal-Mart hose clamp that was found inside the body of the off-duty officer, then described pieces of a remote control receiver found in the nurse's body.

Rudolph's most elaborate statement was about the lawyers who helped him cut a plea agreement to save his life: "They're very, very good, superlative attorneys."

Outside the courthouse, Lyons said she was "nauseated" that Rudolph's plea will allow him to dodge the death penalty.

"We've always felt the death penalty is what he deserved. The punishment should fit the crime," Lyons said. "It's just a sickening feeling."

Pence chief of staff says Meadows was "telling different audiences all sorts of stories"
Thanks for reading CBS NEWS.
Create your free account or log in
for more features.
View CBS News In
CBS News App Open
Chrome Safari Continue
Be the first to know
Get browser notifications for breaking news, live events, and exclusive reporting.