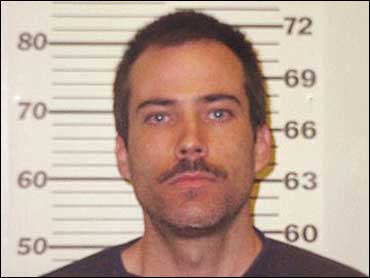 Eric Robert Rudolph, the Olympic Park bombing suspect who became almost a mythic figure during his years as a fugitive in the Appalachian wilderness, was arrested early Saturday as he scavenged for food behind a grocery store.

After a massive manhunt that included infrared scopes on helicopters and logs rigged with motion detectors, it was ultimately a rookie officer on patrol at 4:30 a.m. who spotted a man with a camouflage jacket, blue work britches and a stubbly beard behind a Save-A-Lot food store who arrested Rudolph.

The man who has been on the run for more than five years took off running one more time and finally gave up behind a pile of milk crates. At first, he gave the fake name Jerry Wilson, but officers who recognized him as one of the most wanted men on U.S. soil pressed him on his identity for 20 minutes.

"They asked him his name and he said it was Eric Robert Rudolph," said Cherokee County Sheriff Keith Lovin.

Rudolph is accused in the July 27, 1996, bombing at Atlanta's downtown Olympic Park that killed a woman, wounded 111 others and stunned a world focused on the fanfare of the 25th modern Summer Olympics.

Rudolph is also a suspect in a bombing at an abortion clinic in Birmingham, Ala., that killed a police officer, and bombings outside a gay nightclub and an office building in Atlanta that contained an abortion clinic.

In all, about 150 people were wounded.

"This sends a clear message that we will never cease in our efforts to hunt down all terrorists, foreign or domestic, and stop them from harming the innocent," Attorney General John Ashcroft said in a statement.

The next step will be a hearing in federal court in Asheville, where authorities will decide whether Rudolph should be taken to Atlanta or Birmingham. He faces six federal counts of using an explosive against a facility in interstate commerce, one for each bomb. There were two bombs at two of the sites. The charges carry the death penalty.

CBS News legal consultant Andrew Cohen says Rudolph "faces federal and state charges, terrorism and weapons charges, murder charges and attempted murder charges. And the death penalty is in play, if not under federal law, then certainly under state law, either in Georgia or Alabama.

"You would think that the feds would want to try Rudolph first, much in the same fashion that the feds wanted to try Oklahoma City bombers Timothy McVeigh and Terry Nichols first," Cohen continued. "But perhaps the strongest case against Rudolph, the case that presents the most serious charges, comes out of Georgia under state jurisdiction.

"We are likely to see a little push-and-pull now between different jurisdictions, much like we saw during the sniper case last fall," Cohen said. "Someone is going to have to make a decision on which jurisdiction get to try Rudolph first-- I suspect the feds will make that decision-- and once that happens the FIRST case against him will proceed to arraignment and then on to trial."

When he was captured, the 36-year-old former soldier and survivalist carried a large flashlight and a backpack, but was unarmed. He appeared thin and quickly scarfed down a jailhouse breakfast of biscuits, gravy, eggs and bacon. But authorities said he was in surprisingly good health, clean and still resembled his wanted poster.

"He didn't look like he'd been living in the woods," Kilby said.

CBS News correspondent Jim Stewart says lawmen believe he survived so long by hiding out in the snake and spider infested caves that dot the mountains. He knew them well, having grown marijuana in the area, they say. Occasionally he'd come down from the hills and scrounge for his favorite canned tuna fish and dried fruit. He was searching for food again when police finally caught him, Stewart points out.

And the fact that he was clad in casual clothing and jogging shoes instead of rags reignited speculation that he's been getting help from those in the western North Carolina mountains who sympathized with the handsome, charismatic Rudolph and his extreme right-wing views.

Rudolph is thought to be a follower of the white supremacist Christian Identity religion that is rabidly anti-abortion, anti-gay and anti-Semitic.

"Obviously it is too early to talk about what kind of defense would be offered," Cohen noted. "But it would not surprise me if we see a trial a political defense from him as much as a legal defense, especially if he feels like the case isn't going well anyway. This is a fellow, remember, who at least in some circles has been linked to the anti-government militia movement."

"Someone's been putting him up this whole time," theorized Ernie Cabral, a truck driver in this town of 1,600. "It's almost like the holy wars. He thinks he's doing God's work by stopping abortion. You won't run into a place where there's more religion than here."

FBI agent Chris Swecker said investigators were actively looking into whether Rudolph had help, and he believed that the fugitive's entire time on the run had been spent in the same western North Carolina mountains where he had worked as a carpenter, roofer and handyman.

"I wasn't surprised," Swecker said. "An extensive psychological profile on him suspected strongly that he's always been in this area; dead or alive."

Rudolph first came under suspicion in the Birmingham bombing. A witness jotted down a license plate number of a gray 1989 Nissan pickup that was registered to Rudolph. Authorities who searched a storage locker he rented in Murphy found nails like those used in the attacks.

A task force that once numbered 200 agents scoured a 550,000-acre Appalachian wilderness for any trace of Rudolph, who was last seen July 7, 1998, when he visited a health food store owner in nearby Andrews to stock up on supplies.

Early in the search, they ran across some camping sites believed to be his and found cartons of oatmeal and raisins, jars of peanuts, and tins of tuna.

But the effort dwindled to just a handful of officers and volunteer hunters over the years, and many in the region mocked the government's inability to root out Rudolph. Two country-western songs were written about Rudolph and a top-selling T-shirt bore the words: "Run Rudolph Run."

The FBI had offered a $1 million reward for his capture.

Coming a year after the Oklahoma City bombing, the infamous signature moment of the Olympic Games became an exploding knapsack that sent nails and screws ripping through a packed crowd that gathered to watch a rock concert. Alice Hawthorne was killed. The last week of the games was dominated by the explosion and the fast-moving investigation into security guard Richard Jewell, who was later cleared.

The nightclub and office building blasts occurred in 1997 in the Atlanta area, followed by the abortion clinic explosion in Birmingham in 1998 that killed police officer Robert Sanderson. Some of the bombs were followed by messages from the shadowy "Army of God."

Twenty-one-year-old Murphy police patrolman Jeff Postell, who had been on the force less than a year, came around the back of the Save-A-Lot with his patrol car lights off when he spotted Rudolph and saw him crouched behind the store.

"That's just in a day's work. I don't really deserve any credit," the officer told a packed news conference.

"I think I put a lot of people's feelings at ease."

Among those who have prayed for Rudolph's capture was Emily Lyons, a nurse who was crippled and nearly blinded from shrapnel and nails in the January 1998 bombing at the New Woman All Women clinic in Birmingham.

She said she is looking forward to seeing Rudolph when he goes to trial.

"You don't have to go to the Middle East to find terrorists. Rudolph is one of them. He terrorized and he murdered," Lyons said.

"I know he can't hurt anyone anymore."