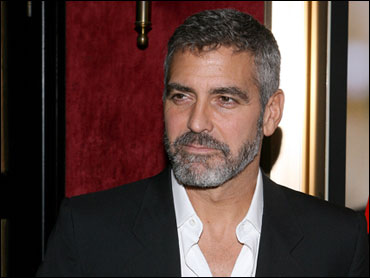 "It's a motorcycle accident, they're on the floor, two people, both wearing helmets," the caller said.

Last week, Clooney, 46, and his girlfriend, Sarah Larson, were riding his Harley motorcycle when they collided with a car on a narrow road in Weehawken, N.J., across the Hudson River from New York. Larson was a passenger on the vehicle. Both were wearing helmets.

"She flew off the bike and hit the sidewalk," the caller said.

The operator told the caller to make sure that Clooney and Larson were not moved and that no one gave them anything to eat or drink.

Despite their injuries Clooney and Larson both attended the premiere of his movie "Michael Clayton" in New York on Monday. Larson came on crutches and Clooney's hand was bandaged.

Photos: On Set With George Clooney

"I'm dinged up a little bit, but I'm wrapped up," Clooney told The ShowBuzz's Michele Jarchin.