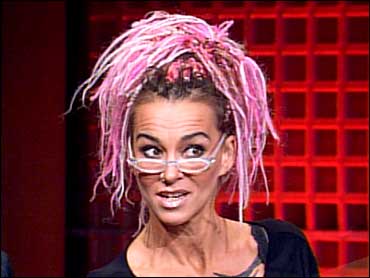 Her hair was pink and pulled up in a spiky ponytail. The Early Show weatherman Dave Price described her look as very "2000 – plus," though Susan "Stop the Insanity" Powter admitted, her hair looked more like cotton candy.

That is how one of the '90s most recognizable faces showed up Thursday to put co-anchors Hannah Storm, and Harry Smith and contributor Dr. Emily Senay to the test. Thursday's topic: '90s trends.

TAKE THE QUIZ and join the decade's celebration along with VH1 series, "I Love the 90s."

Lucky for you, you won't have to deal with buzzing, as the panelists did on The Early Show '90s trivia challenge.

Powter jokingly advised: "Doctor, stress is not good for the soul or the heart, dear," to the visibly frustrated medical correspondent.

Such advice may be a hint for the following question Powter read in her fast-talking way: "I was considered radical in the '90s for my message, 'Stop the Insanity.' Did that mantra mean women should:
A - Eat, Breathe, Move.
B - Stop objectifying women.
C - Stop electing unresponsive representatives?"

If you don't know the answer perhaps, like the diet and self-help guru jokingly recommended to Dr. Senay, you need to get the "Trailer Park Yoga," a yoga video Powter shot in her trailer while she was on her book tour.

After taking a sabbatical, Powter wrote "The Power of Stupid," a new book that deals with the diet industry and why diets don't work.

She tells Price, "I had another baby. I have a 21-year-old, 17-year-old and 6-year-old. I have been raising a human life as we women do. I looked up from the diaper pail and heard 'high protein.' I said, 'OK, it's time for me to say hello again.' Huge book, 'Politics of Stupid.'"

It's a book winners Storm and Smith will get to enjoy as part of the prize they got in the basket of Powter's products.