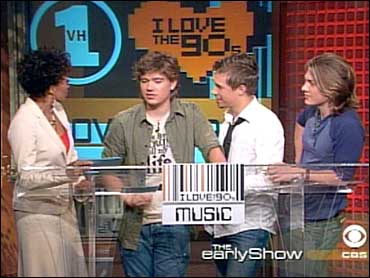 If you do, you may be part of the "Fansons," and you probably know that Isaac is available, Taylor is married with a young baby boy, and Zac has a girlfriend.

The trio joined the fun Wednesday as The Early Show continued its trivia challenge, celebrating along with VH-1 the decade of the '90s. Wednesday's topic was music.

So who better to help out read the questions than one of the decade's most successful trios: Isaac (23), Taylor (21) and Zac (18), collectively known as Hanson.

They put co-anchors Hannah Storm, Harry Smith and Julie Chen to the test. Surprisingly, though Storm was once a D.J., she managed to get only one answer correct, tying for first place with Chen. Now it is your time to test your knowledge. TAKE THE QUIZ.

You can catch Hanson perform live at Irving Plaza in New York City on Wednesday and Thursday nights.

The brothers are in the middle of a tour to promote their new album, "Underneath," which Rene Syler, who was the moderator, pointed out is one of the most successfully released CDs ever.

"We've been so lucky," said Zac. "We released this on our own label we formed to release the new album. It's been amazing, the response from the fans and people around the country."

Taylor added, "It dates back to garage bands and rock 'n' roll. Three-car-garage, that's where we started. Also, I think, we just feel like it is kind of a throwback to, if you can't make it in a garage, then, you can't make it anywhere."

Asked how things have changed for the band, Taylor said with a smile, "I think we're a lot more tired than we were then. Maybe that's just this morning. We've seen a lot more, traveled a lot more. We've been a band for 12 years."

"And have been doing this on a national level for seven," Isaac noted.

Taylor continued, "I think the appreciation is better. It's put in perspective. You go, 'This is a really great job.'"

And a very lucrative one for the brothers; by being on their own label, they are expected to make about $ 8 million. Bands that are with labels make about $2 per CD sold.

On Thursday, tune in for more trivia from the '90s. Susan "Stop the Insanity" Powter will visit to ask the panel about '90s trends.