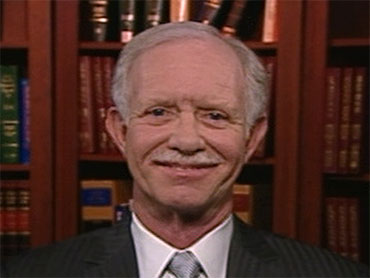 When Aileen Fritsch turned 90 years old, she decided to jump out of a plane to celebrate. It was something she wanted to do for a while but never set a date since she wasn't sure she would live this long.

Boy, was she wrong!

The Minnesota grandmother aimed to match former President George H.W. Bush's 80th birthday skydive. Fritsch said she's a dyed-in-the-wool Democrat and didn't want to let the Republican president get ahead of her.

So, with her family and friends on hand, she jumped out of a plane in Wisconsin with the help of an instructor. She said there wasn't anything to it; she just stepped out of the plane.

"I haven't been afraid of anything so far in this world," she said.

The video of her jump was later played at a birthday party held at her church.

The little lady tells Early Show co-anchor Hannah Storm how she vowed to do the president's same jump, only better -- by landing on her feet.

And how exactly did she get this idea to plummet to the Earth?

"I watched the birds," Fritsch said, "and I thought they were having a darn good time, so I thought, why not?"

This grandmother was pretty in pink for her big day, with pink-dyed tennis shoes, pink painted toe and fingernails and even a pink shirt, jutting out of her jumpsuit.

Fritsch tried to give her grandchildren something to remember her by, and they are sure to never forget Granny's daredevil stunt.

This former registered nurse was never your normal retiree. At the age of 65, she took a 3,000-mile motorcycle trip across the U.S.

"My son, Mark, had just bought this nice new Goldwin. A friend was to go with him, but had a family emergency. He was rather crushed, so I said, 'Why don't you take your mother?'" a very serious Fritsch said, "He died, almost."

After all, she did have friends who live out East.

Now, Fritsch may be 90, but don't tell that to the Department of Motor Vehicles.

"Oh, I lied [about birth year], even on my driver's license. They had a cat fit about that one," the joking woman said.

She admits to scratching a few years off her state ID.

So now what's her philosophy about getting older? Fritsch offers the following advice:

What else can top a good skydive for Aileen Fritsch's 90th birthday?

Why ... substituting for David Letterman, of course.

"I think I could handle that old boy," she said.