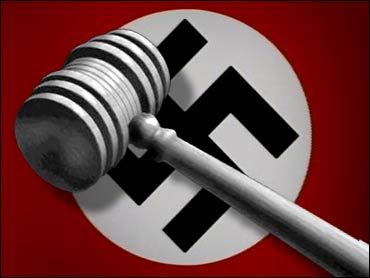 Former SS sergeant Adolf Storms lived in Germany unnoticed for more than six decades after World War II until an Austrian university student last year came across his name while researching a 1945 massacre of Jewish forced-laborers.

The student gave the information to state prosecutors near Storms' hometown of Duisburg, and they have now filed charges against the 90-year-old on 58 counts of murder for the killings near the Austrian village of Deutsch Schuetzen, a German court said.

The day following the massacre, Storms is accused of personally shooting another Jew who could no longer walk during a forced march in Austria from Deutsch Schuetzen to the village of Hartberg, the court said.

Though the court described the suspect simply as a "retiree from Duisburg," media reports have identified him by name as Adolf Storms, a former member of the 5th SS Panzer Division "Wiking."

Authorities refused to give Storms' attorney's name, and the phone at Storms' house in Duisburg went unanswered.

He does not appear on the Simon Wiesenthal Center's list of most-wanted Nazi war criminals, but the organization's top Nazi-hunter Efraim Zuroff said he was "very encouraged by the indictment."

"He wasn't on our radar - he wasn't on anyone's radar - and this is a case that clearly shows it is possible, even at this point, to identify perpetrators who bear responsibility for serious crimes committed during World War II and bring them to justice," he said in a telephone interview from Miami, Florida, where he is promoting his new book "Operation: Last Chance."

The remains of the victims of the Deutsch Schuetzen massacre were found in 1995 in a mass grave by the Austrian Jewish association. A plaque now marks the site.

University of Vienna student Andreas Forster came across the suspect while investigating the massacre, and then obtained archival files from Germany that confirmed his involvement, his professor, Walter Manoschek, told The Associated Press. He refused to refer to the suspect by name, citing privacy concerns.

After alerting German authorities, Manoschek said he visited Storms at his home in Germany several times between July and September 2008, conducting about 12 hours of interviews during which Storms stressed repeatedly that he has no recollection of the killings for which he has now been charged.

He described Storms as "fully there" mentally but in poor physical health.

"Now we'll see if it will come to a trial - it will likely depend on his health," Manoschek wrote following the news of the charges.

The Duisburg court still has to decide whether there is enough evidence to bring the case to trial.

Prosecutor Andreas Brendel said his investigation is ongoing, but so far three former members of the Hitler Youth, who were helping the SS guard the prisoners on the march, have provided witness statements in Austria. A fourth former Hitler Youth member, now living in Canada, is being interviewed this week, Brendel told the AP.

"There are two who witnessed the shooting of the individual Jewish victim, but there are no people still alive who were part of the other shootings themselves," Brendel said. There are, however, statements made during an Austrian trial of others involved that can be used as evidence against the suspect, he said.

According to Manoschek, several of the former Hitler Youth were tried in 1946 and convicted and sentenced to two years in prison for their involvement.

Storms was interned in an American prisoner of war camp following the war, but was released in 1946. In the chaotic aftermath of the war, however, it was not uncommon for possible war criminals to slip through the cracks.

The Austrian press has reported the man changed the spelling of his name after World War II, perhaps helping him go undetected for so long.

Other Recent Prosecutions of Suspected Nazi War Criminals in Germany:

• October 2009: Heinrich Boere, 87, goes on trial in Aachen charged with the World War II murders of three men in the Netherlands when he was a member of a Waffen SS death squad.

• August 2009: Josef Scheungraber, a 90-year-old former officer in the Nazi army, is convicted of murder for ordering the massacre of 10 civilians in a 1944 reprisal killing in Italy; sentenced to life. Scheungraber has said he plans to appeal.

• July 2009: John Demjanjuk, an 89-year-old retired auto worker deported from the U.S., is charged as an accessory to the murder of 27,900 people at the Sobibor death camp in Nazi-occupied Poland, where he is accused of serving as a guard. His trial starts in Munich on Nov. 30.

• December 2005: A Munich court acquits an 88-year-old former Nazi commander, Ladislav Niznansky, of murder in three massacres in Slovakia at the end of the war, citing a lack of reliable evidence that he was involved in the killings.

• February 2004: A court in Hagen halts the trial of Herbertus Bikker, an 88-year-old former SS member, on charges of killing a Dutch prisoner during World War II. He is ruled medically unfit to stand trial.

• July 2002: Friedrich Engel, a 93-year-old former SS major, is convicted by a Hamburg court on 59 counts of murder for a 1944 massacre of Italian prisoners and given a suspended seven-year sentence. A federal court later quashes the conviction, citing doubts over whether the evidence was sufficient. Engel died in 2006.

• May 2001: Anton Malloth, an 89-year-old former guard at the Theresienstadt fortress in occupied Czechoslovakia, is sentenced to life in prison by a Munich court for beating and kicking a Jewish inmate to death in 1944. Malloth's appeal is rejected. He died in 2002.

• April 2001: Julius Viel, an 83-year-old former SS commander, is convicted of murdering seven Jewish prisoners from Theresienstadt in 1945. He is sentenced to 12 years in prison. Viel dies in 2002, with an appeal of the Ravensburg court's verdict pending.