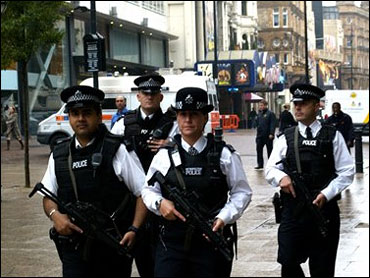 Meanwhile, authorities in Zambia have detained a British man sought in connection with the July 7 London bombings, a Zambian official said.

The official, who spoke on condition of anonymity, said Haroon Rashid Aswat, 31, had been detained in the Zambian border town of Livingstone after he crossed from Zimbabwe. The official declined to give any other details.

British investigators believe Aswat had been in phone contact with several of the four suicide bombers who killed themselves and 52 others in the attacks. The Los Angeles Times and other news media have reported that he was detained by Zambian authorities last week.

Scotland Yard police headquarters said nine men were arrested under the Terrorism Act at two properties in the neighborhood of Tooting, south London, early Thursday morning. They were being held in a central London police station.

One of the four men suspected of carrying out last Thursday's failed attacks was arrested in Birmingham, central England, on Wednesday. Yasin Hassan Omar, 24, was being questioned at a top-security police station in London.

Blair said the failed July 21 attacks, which came two weeks after 52 people were killed by four men who blew themselves up on three subway trains and a bus, was not a sign the terrorists had been weakened in any way.

"This is not the B team. These weren't the amateurs. They made a mistake. They only made one mistake, and we're very, very lucky," he said.

Blair said he was confident that police would find the bombers — as well as whoever backed them.

"The carnage that would have occurred had those bombs gone off would have at least been equivalent of those on July 7, and therefore it is absolutely imperative that we find those responsible," Blair said.

Meanwhile, police deployed the largest number of officers ever on Britain's rail network to reassure the public — three weeks on from the July 7 attacks that killed 56 people, including the four suicide bombers, and following last Thursday's botched attacks.

"It is a time of heightened tension, and we have this deployment of police to give reassurance and deterrence," said Simon Lubin, a spokesman for the British Transport Police.

He declined to say how many officers were taking part in what he said was the "largest ever deployment of police."

Thursday's dawn raids brought to 20 the total number of people in police custody in connection with last week's failed bombings.

Residents in Tooting said police had arrested three men who lived in an apartment above a fast food takeaway selling halal burgers — made with meat slaughtered according to Islamic dietary laws.

The restaurant owner, who gave his name as Ali, said the men who lived there did not seem to be suspicious in any way.

Six other men were arrested from a property in nearby Garratt Terrace, a street opposite the Tooting Broadway subway station.

"There were about a dozen armed police officers shouting `Come on out or we'll send the dogs in.' And then I saw one large, older-looking Asian man being led out. He was dressed in a white gown or robe," said local resident Ben Astbury, 25, who watched the raid from his house in Garratt Lane.

"After that I saw about three other men but I couldn't see clearly what they looked like. My girlfriend then saw two more."

Omar, a Somali citizen with British residency, was arrested in a dramatic raid by dozens of anti-terrorist police and bomb disposal experts on Wednesday in Birmingham, Britain's second largest city. Omar is suspected of trying to blow up the Warren Street subway station last Thursday.

Other raids were carried out Wednesday in south London's Stockwell district, where officers arrested three women on suspicion of "harboring offenders." Detectives believe the man who tried to bomb a train near the Shepherd's Bush subway station on July 21 may have lived there.

Ali Reid, 37, who lives in the Stockwell apartment block that was raided, said he recognized the suspect from images released by police.

"I know the face. I used to see him coming and going," he said. Neighbors said he had three young children and lived with relatives.

A second July 21 suspect has been named as Muktar Said Ibrahim, 27, also known as Muktar Mohammed Said. He came to Britain in 1990 from Eritrea, his family said. He was granted residency in 1992 and British citizenship in September 2004, the Home Office said.