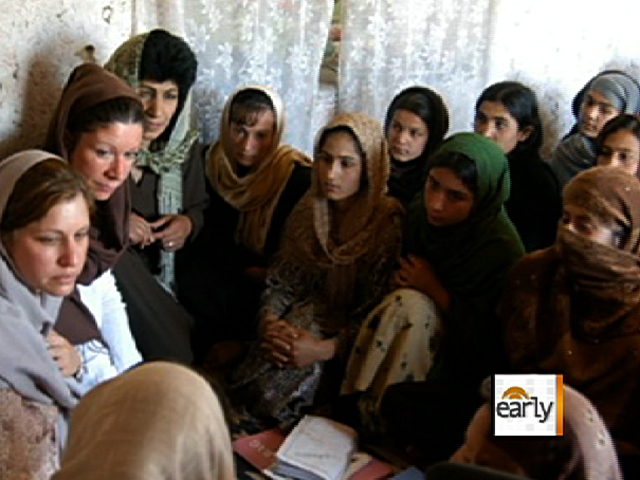 Ten years ago this weekend, the attacks of September 11 left thousands of people without loved ones. No one would blame anyone who became a widow that day if they had been angry, but in Needham, Mass., "The Early Show" found Susan Retik, a widow with an unexpected and inspiring response to her tragedy.

In the aftermath of 9/11, Americans quickly came to know Afghanistan as a place of barren mountains and extreme poverty.

"He actually left little notes on the kitchen table to the kids, saying how much he loved them and he would miss them," Susan recalled.

Ben was 4 years old that day. His little sister, Molly, was just 2. Susan was seven months pregnant with their third child.

Susan said, "Dave called from the airport because we had missed each other in the morning. He said, 'I gotta go, we're boarding. I love you.' And that was the last I obviously ever heard from him."

"The whole world came to my rescue," she said. "And that support truly helped me get through those darkest days."

The support Susan - and many Americans receive following the death of a loved one - is something many couldn't imagine living without, yet for Afghanistan's one million widows, care like Susan received just hours after her husband's death is almost non-existent.

"Early Show" co-anchor Erica Hill asked Susan, "When did you stop and say to yourself, 'If I can get through this with that help, clearly there are other people who need it, too?'"

Susan said, "I remember thinking, if it was so terrible to be a woman, oh my gosh, what happens when they're widowed? How do they survive? I remember thinking maybe I could help one woman and her family, the way so many people helped me."

Out of that moment, Beyond the 11th was born. Co-founded with the help of Patti Quigley, also widowed on 9/11, what began as a quest to help one woman has now helped thousands.

In just eight years, Beyond the 11th has raised more than $1 million. The funds have been passed on as grants to organizations in Afghanistan helping women learn a skill or trade, such as DOSTI, a soccer ball manufacturing business, started by two Afghan women, which now employs over 400 people, many of them widows.

The hand-stitched balls can be made at home and are sold in the U.S. But their true value, Hill noted, is the hope they give to the women making them.

Rezia Jan, a program manager in the Afghanistan efforts, said of Susan, "Whenever we need help, she's there to help us. And I think she realizes that what work we are doing, is making a difference."

President Barack Obama said of her efforts, "Susan says these women are not our enemy."

But even that honor is no match for the recognition at home.

Ben Retick, now 14, said of his mother, "Ever since I was little I always looked up to her. I mean she is always working from home, she's always doing something. I'm so proud of what she does."

Susan says she sees a lot of David in Ben and in her daughters, Molly, now 12, and Dina, who turns 10 in November.

Now remarried, and also mom to 3-year-old Rebecca, Susan knows David would be proud to see his family today.

Susan told Hill, "I know he wouldn't have wanted me to respond with more hate. I don't want Dave's memory to be about hate and anger and terrorism. I want it to be about this phenomenal human being that he was. And I can't think of a better way to carry that on than with the work that we do."