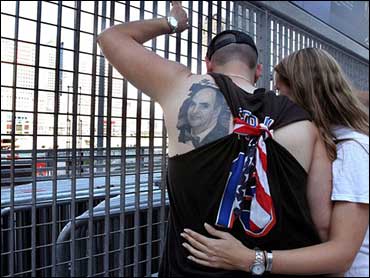 Holding up pictures of their loved ones and signs that read "Preserve Sacred Ground," more than 500 relatives of Sept. 11 victims rallied at the World Trade Center site Saturday against a proposed museum.

In Washington, about 1,500 people took part in the Pentagon's walk-in tour of the site where a hijacked plane crashed into the building.

Family members worry the International Freedom Center will take attention away from those who died in the attack. They said the museum should not be allowed to show exhibits about struggles for freedom around the world.

"These are important stories to tell," said Jack Lynch, whose firefighter son Michael Lynch is one of the 2,749 people who died at the trade center. "Elsewhere, not at America's memorial."

The rally by more than a dozen family groups came a day before the fourth anniversary of the terrorist attacks. A bouquet of white flowers and several single, red roses were tucked into the metal fence surrounding the site, while huge American flags hung outside nearby office buildings.

"The IFC threatens to turn ground zero into a place of endless controversy rather than a place of honor," said Anthony Gardner, whose brother Harvey died at the trade center.

The Freedom Center and another museum, the Drawing Center, were chosen more than a year ago to occupy cultural space at the site in a building close to the planned "Reflecting Absence" memorial.

But rebuilding officials said last month the Drawing Center would look elsewhere for a home and that the Freedom Center would have to submit more detailed plans and respond to family objections to ensure its place at the site. A mediator has recently been recruited to help museum officials and the families communicate.

"We respect those family members who believe that the World Trade Center site should be limited to the memorial and memorial center museum, even as we and other family members believe that a living memorial, reflecting our common resolve to preserve freedom, should also have a place on this sacred ground," Freedom Center chairman Tom Bernstein and vice chair Paula Berry, who lost her husband on Sept. 11, said in a statement Saturday.

The one-day event at the Pentagon commemorated the anniversary of the American Airlines Flight 77 that crashed into the Defense Department headquarters, killing 184 people. Officials had permitted tours of the site only for families of victims and for groups with reservations.

In clusters of about 20, visitors walked from a Pentagon parking lot to the southwest portion of the building where the rebuilt wall included a stone scorched by the crash and inscribed with the date "September 11, 2001."

The tour groups also passed through a Pentagon room dedicated to the victims, whose names were inscribed on black panels and whose personal stories were contained in books.

"When you see something with the names it's more personal," said Jean Davidson, 56, of Atlanta, Texas. "Very moving, very sad."

Visitors also saw a memorial chapel, a simple room with stained-glass windows inscribed with the words "I will support and defend" and "so help me God" quoted from the oath taken upon enlistment into the military.

Tours moved past the 2-acre outdoor site set aside for an $18 million contemplation park. Organizers have raised about half the construction cost and plan to break ground in fall 2006.

James Laychak, president of the Pentagon Memorial Fund, said Saturday he expects to have raised $9 million by the end of the month. He said he is confident the organization will succeed in its fundraising, which is focusing on large corporate gifts but welcomes smaller donations from individuals.