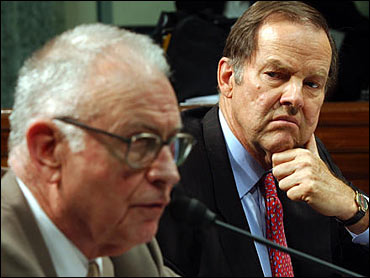 The Sept. 11 commission was so frustrated with repeated misstatements by the Defense Department and Federal Aviation Agency about their response to the 2001 terror attacks that it considered an investigation into possible deception, the panel's chairmen say in a new book.

Republican Thomas Kean and Democrat Lee Hamilton also say in "Without Precedent" that their panel was too soft in questioning former New York Mayor Rudolph Giuliani — and that the 20-month investigation may have suffered for it.

The book, a behind-the-scenes look at the investigation, recounts obstacles the authors say were thrown up by the Bush administration, internal disputes over President George W. Bush's use of the attacks as a reason for invading Iraq, and the way the final report avoided questioning whether U.S. policy in the Middle East may have contributed to the attacks.

Kean and Hamilton said the commission found it mind-boggling that authorities had asserted during hearings that their air defenses had reacted quickly and were prepared to shoot down United Airlines Flight 93, which appeared headed toward Washington.

In fact, the commission determined — after it subpoenaed audiotapes and e-mails of the sequence of events — that the shootdown order did not reach North American Aerospace Command pilots until after all of the hijacked planes had crashed.

The book states that commission staff, "exceedingly frustrated" by what they thought could be deception, proposed a full review into why the FAA and the Pentagon's NORAD had presented inaccurate information. That ultimately could have led to sanctions.

Due to a lack of time, the panel ultimately referred the matter to the inspectors general at the Pentagon and Transportation Department. Both are preparing reports, spokesmen said this week.

"Fog of war could explain why some people were confused on the day of 9/11, but it could not explain why all of the after-action reports, accident investigations and public testimony by FAA and NORAD officials advanced an account of 9/11 that was untrue," the book states.

The questioning of Giuliani was considered by Kean and Hamilton "a low point" in the commission's examination of witnesses during public hearings. "We did not ask tough questions, nor did we get all of the information we needed to put on the public record," they wrote.

Commission members backed off, Kean and Hamilton said, after drawing criticism in newspaper editorials for sharp questioning of New York fire and police officials at earlier hearings. The editorials said the commission was insensitive to the officials' bravery on the day of the attacks.

"It proved difficult, if not impossible, to raise hard questions about 9/11 in New York without it being perceived as criticism of the individual police and firefighters or of Mayor Giuliani," Kean and Hamilton said.

Congress established the commission in 2002 to investigate government missteps leading to the Sept. 11 attacks. Its 567-page unanimous report, which was released in July 2004 and became a national best seller, does not blame Bush or former President Bill Clinton but does say they failed to make anti-terrorism a high priority before the attacks.

The panel of five Republicans and five Democrats also concluded that the Sept. 11 attacks would not be the nation's last, noting that al Qaeda had tried for at least 10 years to acquire weapons of mass destruction.

In their book, which goes on sale Aug. 15, Kean and Hamilton recap obstacles they say the panel faced in putting out a credible report in a presidential election year, including fights for access to government documents and an effort to reach unanimity.