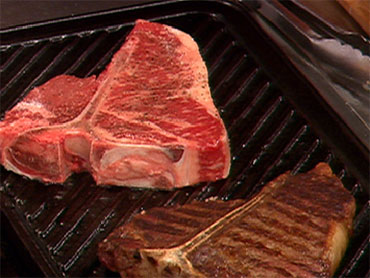 Howard Lutnick survived the Sept. 11 attack on the World Trade Center because he was taking his son to kindergarten. But he lost his brother, his best friend and an unimaginable 658 employees.

In the weeks that followed, the chief executive of bond trader Cantor Fitzgerald became the public face of grief and then a target for Cantor family members outraged at his decision to stop paying the salaries of their lost loved ones.

His story and that of the firm, which occupied the top floors of 1 World Trade Center, are told in a new book, "On Top of the World," by Tom Barbash, a writer and college friend of Lutnick who shadowed the Cantor chief for six months after the attack.

"My life had become surreal," said Lutnick, who is 41 and has a gravelly voice and slicked-back hair. "I just wanted help in trying to remember. ... I wanted someone who was at least one step removed."

Lutnick and Barbash spoke at Cantor's temporary headquarters in midtown, where Lutnick's office decor includes fragments of Rodin sculptures salvaged from the trade center ruins, relics of the collection amassed by the firm's founder, Bernie Cantor.

Initially, the book was envisioned as a memorial, said Barbash, who teaches writing at Stanford University and San Francisco State University and has published a novel, "The Last Good Chance." He and Lutnick were schoolmates at Haverford College in Pennsylvania.

The new book, subtitled "Cantor Fitzgerald, Howard Lutnick, and 9/11: A Story of Loss and Renewal," tells how the firm survived. Present-tense narrative passages alternate with first-person accounts from Lutnick and others who were spared by quirks of fate - they were late to work, they were on vacation, they were in the lobby clearing a visitor through security.

On Sept. 13, 2001, a weeping Lutnick told Connie Chung on national TV that Cantor Fitzgerald was determined to stay in business to take care of the victims' families. He became, Barbash writes, "the face of tragedy."

Within a month, Lutnick became something quite different when Cantor widow Lynda Fiori went on "The Bill O'Reilly Factor" and complained that Lutnick had not spoken with her, and no one from the company had attended her husband's funeral.

"Do you think he's a phony?" O'Reilly asked.

"I think so," Fiori answered.

The negative coverage continued, much of it centering on Lutnick's Sept. 15 decision to stop paying his lost employees.

Chung followed up her interview with a story on discontented widows.

"Don't expect these women to cry for Lutnick," Chung said. "Days after the tragedy, he did something they can neither forgive nor forget: He cut off paychecks at the same time the families were hoping they were alive."

Lutnick began receiving hate e-mails so vitriolic that his family feared for his safety.

Asked if he should have handled anything differently, Lutnick would not second-guess himself.

"I couldn't possibly have made another decision," he said. "Three hundred twenty-five people could not, days after the attack, pay the salaries of 658 people who died, when it was unlikely ... that the 325 people would have had a business that covered their own pay."

"On Top of the World" describes how Lutnick won back the trust of the Cantor families by convening town meetings, phoning hundreds of family members and writing 1,300 condolence letters.

He promised to dedicate 25 percent of the company's profits to the families for five years and to pay bonuses and 10 years of health care. Part of the proceeds from the book will go to a relief fund for the families, according to the publisher, HarperCollins.

"I still have town meetings," Lutnick said. "This is the life that we embrace because these are our friends who we lost."

Sheila Martello, whose husband, James, was an equity sales trader for Cantor, said Lutnick has been "nothing but helpful."

"I've spoken to him on the phone quite a bit," she said in a telephone interview. "I think he's doing everything he can."

Seventeen months after the attack, Cantor Fitzgerald has about 500 employees. It is operating out of temporary offices on East 57th Street and is shopping for a permanent home - on low floors, said Lutnick, who is on the third floor now.

Cantor has given $90 million in profits to the Sept. 11 victims' families so far.

"If it wasn't my son's first day of school I wouldn't be here," Lutnick said. "So the reason I'm here must be to help the families. ... And because I have that purpose I'm OK."