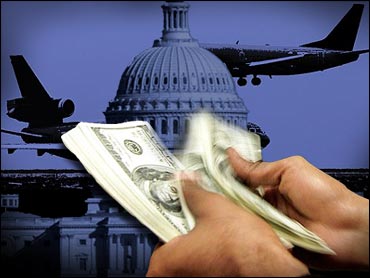 A week after the Sept. 11 attacks shook the country and its air transportation system to the core, executives from America's big airlines went to Washington looking for help.

"Almost no airline is strong enough to survive for long, facing the upcoming challenges," Delta Airlines CEO Leo Mullin said at the time.

Propelled by such dire predictions and the airlines' considerable lobbying clout, Congress, over the course of just two days, introduced, passed, and got presidential approval for a $15 billion bailout. Of that sum, $5 billion was earmarked for direct payments to stabilize the nation's air transportation system.

Like many Americans, Frank Roman assumed that money was meant to keep passenger planes aloft. But as CBS News Correspondent Cynthia Bowers reports, then he found out his former employer and current competitor in the freight forwarding business - a company that doesn't even own airplanes - received nearly $10 million.

"I thought this was supposed to keep the airlines flying," says Roman.

While two-thirds of the money doled out by the Department of Transportation did go to the major carriers, hundreds of millions more went to places you wouldn't expect.

"It was a massive boondoggle," says Republican Illinois Senator Peter Fitzgerald. "Congress just got out the ladle and shoveled it all over the place."

For example: $20 million was shoveled to three bankrupt airlines like Vanguard, Midway, and Reliant. Nearly $165 million went to package-delivery companies. Another $5 million went to helicopter companies that, among other things, ferry workers to oilrigs and run tours to the Grand Canyon. Even three companies that arrange travel from the U.S. to Cuba cashed in.

And for every multi-million dollar payout, there were dozens of small ones to places like Flying Eagle Aviation of Kokomo, Indiana. Company vice president Dottie Crebo never expected to find herself on a list alongside Delta, United and American.

"We got a little over $2,000 in April of this year," says Crebo. "I did not really expect the federal government to pay attention to small businesses like ours."

"It is a prudent decision for any organization to take advantage of an opportunity," says LaMacchia.

Fitzgerald says it was taxpayers who were taken advantage of.

"It's an embarrassment how free Congress was with taxpayer dollars," Fitzgerald says.

Free with dollars, but not forthcoming with details. Even if Americans wanted to find out how the DOT made its decisions, they can't because the department says the applications process is private -- even from the public who is paying the price.