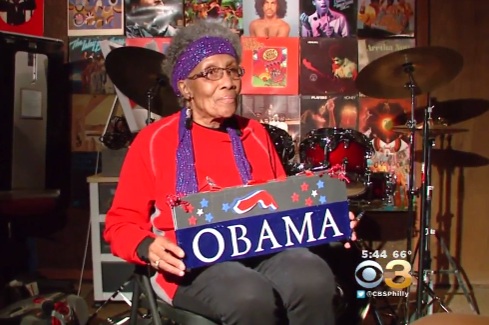 A Chestnut Hill grandmother has released a rap video that is gaining traction on social media, and she has a message she hopes America responds to, CBS Philly reports.

At 84 years young, Dr. Lucille Ijoy is not your typical grandma. A family therapist by trade, she's a motivational speaker and radio host.

She's known to sing, dance and rap to get her point across.

"I do it to help children, to help families, to help couples," Ijoy said. "I love it when I can see people's relationships evolve."

Those who know "Grandma Ijoy" also know she is a huge fan of President Barack Obama. She's created buttons and a song, "There's a Thankful Movement Going On," hoping to spark a sea of gratitude directed at the White House.

"He's cool," she told CBS Philly. "You see him coming down off that airplane -- whenever he steps off the plane my phone starts ringing!"

Recently, Grandma Ijoy teamed up with Emmy Award-winning producer Bill Jolly. He threw out her song and helped her come up with a rap titled, "Listen to Grandmama." The goal is to get America to say "Thank you to Obama."

"I just have that thank you spirit," she said.

The next thing Grandma Ijoy knew she was the star in a rap music video, which shows her dancing, swimming and even flying thanks to a green screen in Jolly's Overbrook studio. Grandma Ijoy get's "funky" while reminding people to "mind their manners."

"She was just a joy, she was amazing," said Jolly.

The song is so catchy, they're hoping people start dancing, too.