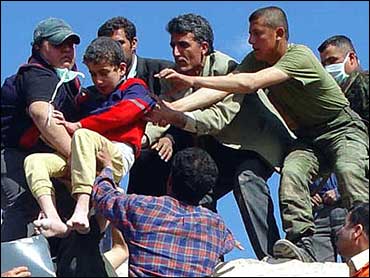 Workers, soldiers and families dug - mostly with their hands - through the remains of a collapsed school dormitory to extricate children whose cries could be heard in the rubble after a powerful earthquake rumbled through southeastern Turkey.

Of the 198 students in the school, 93 had been saved by Thursday evening, while the bodies of 21 children and a teacher were recovered, government officials announced through loudspeakers at the scene. Another 84 children were still unaccounted for, and terrified parents prayed and wailed as they waited for news.

One by one they were found and brought out, reports CBS News Correspondent Tom Fenton. Many were dead, but a number survived: battered, traumatized, but amazingly still alive, even though the dormitory had collapsed like a house of cards.

"My friends are waiting for help in there. They were calling for help as they were pulling me out," 12-year-old Veysel Dagdelen was quoted as saying by the Anatolia news agency after he was pulled out of the debris.

Rescuers also dug through a destroyed apartment block in an effort to get to people out. One man carried a dead baby into a hospital.

The magnitude-6.4 quake struck at 3:27 a.m. and was centered just outside Bingol, 430 miles east of Ankara, the Kandilli seismology center in Istanbul said.

A bridge and at least 25 buildings collapsed in the center of Bingol, a city of 250,000 inhabitants, the mayor said. Damage could be seen throughout the city, where the streets were filled with terrified residents.

Most of the damage seems to have been to public buildings and large houses where the construction standards are not very good, reports CBS News Reporter Nicole Pope.

The earthquake damaged power and telephone lines. More than 100 aftershocks hit the region, and rescue workers were unable to reach many villages.

About 100 were killed and Housing Minister Zeki Ergezen said the death toll could be 150 throughout the region.

Bingol is a largely rural poor area in the predominantly Kurdish southeast that suffered for years from the fierce fighting between the Turkish army and Kurdish rebels seeking autonomy.

Balgi said the voices of children screaming could be heard from the debris of the four-story dormitory.

Using cranes and jackhammers, soldiers, rescuers and local residents worked their way through the debris desperately trying to save surviving students. Many injured students were being treated on mattresses laid out near the flattened building.

"The whole building was on top of me. We all started screaming," he said.

Relatives rushed toward soldiers every time a rescued boy was carried out on a stretcher to check if their children had been saved. Most of the children are sons of poor farmers from nearby villages that do not have schools.

Parents questioned the quality of the school's construction.

"The stable I built did not collapse, but the school did," said Abdullah Gunala, the father of a rescued student.

Visiting the area, the prime minister said proper inspections had not been carried out and that shoddy material had been used to build the school.

"Investigations will be launched and the guilty will be prosecuted," he said.

Doctors at Bingol's state hospital appealed for help to deal with the crisis. The hospital was seriously damaged in the quake and scores of injured were being treated outside.

"We need every kind of help," said Ilhan Cokabay, chief doctor at the hospital. "Medical supplies, people, whatever."

The quake, which lasted 17 seconds, was felt in the nearby provinces of Erzincan, Tunceli, Bingol, Erzurum, Kayseri and Sivas.

Earthquakes are frequent in Turkey, which lies on the active North Anatolian fault. A 1971 quake in Bingol killed 900 people.