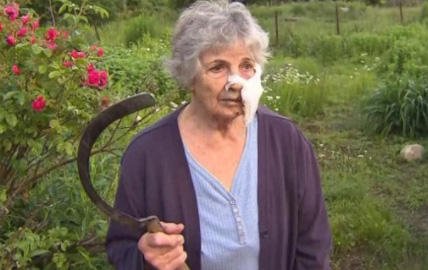 It was dusk when Elsie Dabrowski made her nightly trip to lock up the chicken coop and decided she would do a little bit of weeding in the garden.

The 80-year-old grandmother was at a rose bush hacking weeds with her sickle when the bobcat pounced on her, sinking its teeth into her face.

"All I could think of is 'Why is he doing this? Why is this stupid cat attacking me?"' Dabrowski said.

She turned her sickle on it as some of her five dogs scrambled over to help.

"He just kept scratching and biting, and then the dogs came and chased him off," she said.

By then, the bobcat had ripped into her in five places, causing wounds that would take 60 stitches to close.

Her adult son heard the commotion from his yard nearby.

"He heard it and he got the gun and came down," she said.

He killed the bobcat with a shotgun blast.

Monday, it tested positive for rabies, but Elsie still considers herself lucky.

Elsie, her son and her dogs are getting rabies shots.

But she harbors no ill will towards the bobcat, which already had a face full of porcupine quills before it attacked her.

"The animal was sick and he was looking for an easy meal with the chickens so he came here," she said.

She's had close encounters before on her 90 acres, with bears, moose, and coyotes, but had never even seen a bobcat.

The  only change in routine she plans is to finish her chores before dark.

State wildlife experts say this is the first rabid bobcat confirmed in New Hampshire since 2013. But the bobcat population in the state has grown steadily since 1989, when hunting them was outlawed.