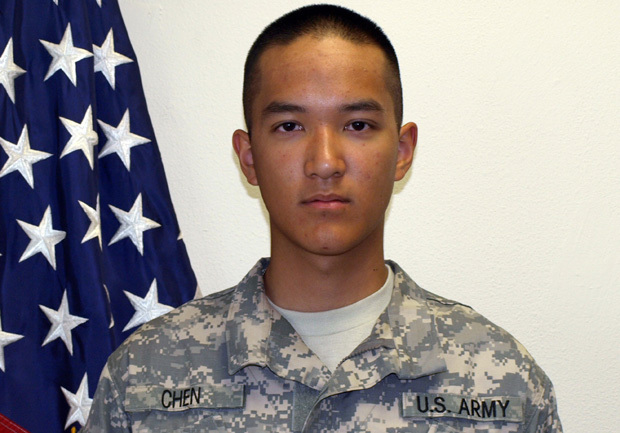 NEW YORK - Eight U.S. soldiers have been charged in the death of a fellow GI, a Chinese-American who apparently shot himself in Afghanistan after being subjected to what a community activist said were assaults and ethnic taunts from his comrades.

Pvt. Danny Chen, a 19-year-old from New York's Chinatown neighborhood, was found in a guard tower in Kandahar province Oct. 3 with what the Army said appeared to be a self-inflicted gunshot wound.

In a statement, the Army said Wednesday that eight soldiers in his company were charged with crimes ranging from dereliction of duty to negligent homicide and manslaughter.

Military officials gave no details on exactly what role the soldiers are alleged to have played in Chen's death. But a community activist raised the possibility that their bullying drove him to suicide.

Chen's fellow soldiers dragged him across the floor, threw stones at the back of his head, forced him to hold liquid in his mouth while upside down as part of an apparent hazing, and called him "Jackie Chen" in a mocking accent in a reference to the action star Jackie Chan, according to Elizabeth OuYang, president of the New York chapter of the Organization of Chinese Americans.

The details of his alleged hazing came from Facebook and email messages, discussions with cousins and a few pages of Chen's journal released by the Army, OuYang said at a Chinatown news conference.

Chen's relatives said they were encouraged by the charges.

"We realize that Danny will never return, but it gives us some hope," said Yen Tao Chen, his father, speaking through a translator. Chen's parents are immigrants from China.

Community activists said the Army still has not fully explained the circumstances of Chen's death. They are meeting with Pentagon officials Jan. 4.

"We need to know the whole truth," Rep. Nydia Velazquez, D-N.Y., said. She added: "Racial discrimination and intolerance have no place in today's military."

At the time of his death, Chen's mother told WCBS' Cindy Hsu through a translator that her son had always dreamed of serving in the military. He wanted to serve in the military and then join the NYPD. He enlisted in the Army early this year despite his family's objections - Danny was their only son, and they were concerned about him.

Once serving abroad, things seemed to go horribly wrong. The family was told Chen was "harassed and beaten" by fellow soldiers. Chen's parents became concerned it might've been a racial issue.

"[Chen's parents] asked the question, specifically, 'Are you discriminated against because you're Chinese or whatever.' Danny said 'I would rather not answer that question,'" the translator told Hsu.

The Army announced earlier it is investigating Chen's death.

VanBockel, Holcomb, Hurst, Curtis and Offutt were charged with the most serious offenses, including involuntary manslaughter, negligent homicide, and assault and battery.

Schwartz, the only officer among the accused, was charged with dereliction of duty.

The soldiers are still in Afghanistan but have been assigned to a different base, removed from their duty positions and placed under closer supervision, the military said.