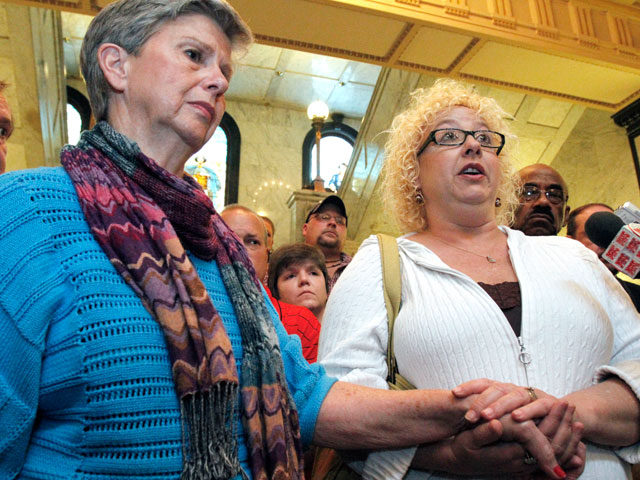 (CBS) - Four years ago, Mississippi Governor Haley Barbour was criticized for pardoning six men who had been convicted of killing their wives or girlfriends. And now, he's done it again.

Barbour's more than 200 pardons have sparked national outrage, and among the most appalled are those who work with victims of domestic violence.

"This sends a chilling message to victims of domestic violence," says Liz Roberts, Chief Program Officer of Safe Horizon, a victim's service agency in New York City. "The message is that the government isn't prepared to protect them and to take the crimes against them seriously."

According to a new survey by the Centers for Disease Control, one in four American women fall victim to severe physical violence by their partner, and according to the Bureau of Justice statistics one in three female victims of homicide is killed by her intimate partner.

Below is a breakdown of the men - and one woman - who were convicted of murdering their intimate partners and had their records wiped clean by the outgoing governor.

David Glenn Gatlin: In 1993 Gaitlin reportedly drove nine hours to shoot and kill his estranged wife, Tammy Gaitlin, while she held their infant son, reports the Jackson Free Press. He also shot her friend Randy Walker, who survived. Although pardoned and released, the district attorney for the county in which he committed the murder told NBC affiliate WLBT yesterday that he does not believe Gatlin completed the constitutionally mandated requirement that he give 30 days public notice that he was seeking a pardon.

Anthony McCray: Convicted of killing his wife, Jennifer McCray, in 2001. According to the Associate Press, the two had reportedly been arguing at a cafe. He left, returned, and shot her once in the back. CNN reports that McCray was granted a full pardon and has been released.

To be fair, we include Patricia L. Simpson, who shot and killed her husband, Donald Simpson, in 2003, reports Fox affiliate WALA. Simpson served just three years before she was pardoned.

Paul Joseph Warnock: Murdered his girlfriend, 18-year-old Carol Ann Hall in 1989. According to the Jackson Clarion-Ledger, Warnock shot Hall in the back of the head while she slept.

Michael Davie Graham: Stalked his ex-wife, Adrienne Klasky, for three years before he finally shot her to death with a 12-gauge shotgun while she waited at a traffic light in her car in 1989, reports the Biloxi Sun Herald.

Clarence Jones: Murdered his ex-girlfriend, 22-year-old Carla M. Smith, in 1992. According to the Jackson Free Press, Smith had filed multiple assault and trespassing charges against Jones before her death. Jones waited for her in her apartment on New Year's Day and killed her by stabbing her 22 times, reported the Vicksburg Post.

Victor C. Collins: Convicted of fatally beating his girlfriend, Peggy Campbell, with a tree branch in 1994. According to the Sun Herald newspaper, Campbell's body was found in a pile of leaves.

Jimmy Lee Avera: According to the Sun Herald, in 1992 Avera shot and killed his estranged girlfriend, Tabitha Ann Sparks, 24, while she was pregnant, and while her two children were at home with her. He fired 11 shots at her, including one in the back as she tried to run away. Avera had been granted parole before Barbour pardoned him in 2008.

Ex-Minneapolis officer who killed 911 caller will be be released