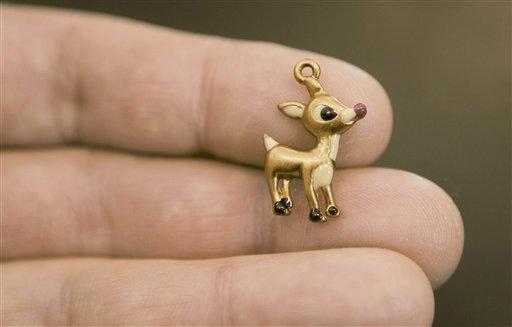 When Diane Scott and Mark Cadigan married in 1990, they created a blended family. Her six children, his one and then one they had together.

As the kids watch the wedding video, they can't help but cry. Their mom died suddenly last June of a heart attack.

Janice Scott-Cadigan, 21, says, "They took her to the hospital so everyone was thinking: Oh wow there's a chance."

But there wasn't. Diane's husband Mark returned from the hospital a widower with eight children.

Janice says as tears roll down her face, "I remember at first I was so upset with my mom after Mark passed away because it was like, how you can be so selfish right now, we need him. How could you take him away from us? You just went and left us and now you're taking him. But then after a while, you think about it, and they just have to be together."

Dolly Scott-Cadigan, 14, says in a way it is comforting to know that her parents are together.

Crying, 23 year-old Jennifer Scott-Cadigan says, "Even though the situation that we're left is really bad, I really wouldn't have it any other way. I would rather lose both of them than just lose one of them, because the one who was left here really wouldn't be living any more."

Sherri Plamondon, the 911 dispatcher, who took the girl's call when their mom had the fatal heart attack says, "I broke down," when she learned they lost their dad as well. "I just lost it, which is so uncharacteristic of this job. We just don't do that."

Plamondon sent out a citywide e-mail seeking help for the kids. The community responded: painting the house, donating a new roof, windows and doors. Local firefighters are remodeling the bathroom.

"It is very surprising," Jennifer says. Dolly adds, "It was just a shock, you don't think that people are like that. It inspires you to be a better person."

Police officer Mony Nop began regular visits to check on the kids. The Livermore Police Department D.A.R.E. Instructor says, "It's just heartwarming to meet them, to greet them. They love the hugs. Love the attention, just a great bunch of kids."

The two oldest siblings, 23 year-old Jennifer and 21 year-old Janice have just been awarded legal guardianship of the youngest, who are still minors. This means taking on every role from guidance counselor, to nurse, to disciplinarian.

Asked what it is like to have her sister tell her to do things like her homework, Dolly says, "It's not new, but it's weird because now if I say no, they can ground me."

And she notes with a laugh that has already happened.

To Jennifer, taking the parent role is no sacrifice. She says she still gets to have fun. "We just have to bring them with us now," she says and laughs.

Fire Capt. Bill Lockridge also checks in regularly and has made these siblings part of his extended family.

"I just love Bill, says 18 year-old Rachael Scott-Cadigan. "He makes you feel so welcome, so comfortable, like you're one of his own."

A lot of people can't handle a catastrophe. They might runaway, might turn to drugs, or might drop out. Asked why he things the kids are not doing that, he says, "I hope that that's because we did give support where was needed, and let them know, we're not going to let anything to happen to you if we can help it. So I just love them. They're good to be around, and I want to be around them for the rest of my life."

Nope, as well, thinks she will have a close connection with the siblings. "Forever, forever," she says.

As for the kids, they believe Sherri, Mony and Capt. Bill are guardian angels sent by their parents to watch over them. The eight youngsters age 12 to 23 are overcoming their catastrophe.

Dolly points out, "Our parents did everything for us. We have to show them that all their hard work paid off."

Janice adds, "They were great people, and that comes out thru us. We're awesome people, all of us. My brother and sisters are the most awesome people that I know."

Mom and dad would be proud.