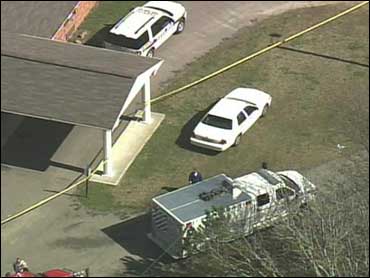 The gunman was also injured before he was apprehended by police after the 10 a.m. shooting at Pinelake Health and Rehab in the town of Carthage, Carthage Police Chief Chris McKenzie told several television stations. A police officer was also hurt.

Gretchen Kelly, spokeswoman at FirstHealth Moore Regional Hospital, said six people were brought to the hospital from the nursing home about 60 miles southwest of Raleigh. Kelly said two of the injured died at the hospital, but it wasn't clear if those two were among the six initially reported dead by police.

Kelly said two other patients had been discharged, while two were still being treated. She wouldn't release further details on the injuries or conditions of those hospitalized.

McKenzie said the gunman wasn't a patient at the nursing home, but didn't offer any further details on what the gunman's motive might have been. Police named the suspect as Robert Stewart, reported CBS News correspondent Mark Strassman.

CBS Affiliate WRAL reports that authorities at an afternoon news conference said Stewart was not believed to be related to any of the victims.

Strassman reported that seven of the deceased were patients at the facility - most of them in their 70s or 80s. One of those killed was a 98-year-old patient.

A nursing home Web site said the facility that opened in 1993 has 110 beds, including 20 for those with Alzheimer's disease.

Carthage is a small town of roughly 1,800 people in the North Carolina Sandhills, an area popular among retirees and home to several noted golf courses, including the famed Pinehurst resort and its No. 2 course that regularly hosts the U.S. Open.