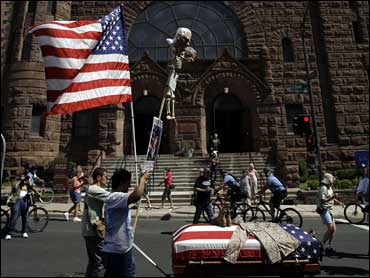 Police in riot gear arrested two women in their 70s and seven others taking part in an antiwar march at the Republican National Convention on Sunday after they crossed a security fence into a restricted area near Xcel Energy Center.

The nine were arrested for trespassing, said Doug Holtz, a St. Paul police commander. All but one, who did not have identification, were released by police shortly after their arrest.

Eight of the protesters were handcuffed, and some flashed the peace sign to onlookers and media gathered at the security fence. Betty McKenzie, a 78-year-old nun, was not handcuffed as she was led away. The protesters had planned ahead of time to cross the fence, and organizers had announced it ahead of the march, which drew about 250 people.

"We are going to march into the arms of police. Whatever they are going to do is all right with us," organizer David Harris said to the marchers before they entered the restricted zone. He was one of those arrested.

"I believe it's time to stop this war," said Steve Clemens, 57, of Minneapolis, who also crossed the fence.

The arrests capped an otherwise peaceful march organized by Veterans for Peace and fellow peace group CodePink that began at the Capitol and made its way to the convention hall. It was a quiet warm-up before a planned march Monday that was expected to attract a larger crowd; organizers of Monday's march have said they hope to have as many as 50,000 people.

Jeanne Hynes, 72, of St. Paul was arrested along with her friend McKenzie, a nun from the Sisters of St. Joseph.

"We both planned to do this if we could make it this far," said Hynes as she waited to be arrested at the end of the half-mile route. "We weren't sure if our backs would hold up."

As the march began, Harris read the names of soldiers and civilians killed in Iraq. After each name was read, the marchers near Harris shouted "We will remember you!"

Bringing up the rear of the march, about three dozen people wearing orange jump suits and black hoods over their heads marched in silence with their hands behind their backs. Marchers carried banners that said, "Torture Destroys Us All." Sixty-one combat boots were lined up on the Capitol lawn to represent Minnesota soldiers who died in Iraq.

"We want to make it very clear we are pro-soldier and anti-war," said Madea Benjamin, co-founder of CodePink.

Korean War veteran Bill Starr, 73, was carrying an American flag and a tombstone with the name of a soldier killed in Iraq. He said he sees futility in war.

"I can lock up my house and scream about it or I can come here," said Starr, of Minneapolis, who marched with his 37-year-old daughter.

Meanwhile, members of the RNC Welcoming Committee - which is not a sponsor of the Monday march but has been helping other protest groups coordinate - were trying to regroup after a series of raids Friday night and Saturday saw six people arrested and materials seized.

Assistant St. Paul Police Chief Matt Bostrom said those arrested had plans to disrupt transportation in the area, damage property and injure others.

Some of what was seized included knives, axes, bomb-making materials and anti-war literature.

It didn't appear likely that those arrested would be out of jail in time to help organize protesters or participate in Monday's event. They aren't required to be brought before a judge until noon on Wednesday, said their attorney Bruce Nestor.

Even so, Nestor said he was hopeful that a judge would review the cases against the six on Sunday and they could be released sooner. He said none of the six have any convictions other than misdemeanors and none have a history of violence.

The arrested can legally be held for 36 hours, not including the weekend or the Labor Day holiday.

"It's pretty clear that the point is to get organizers out of the picture," said Andy Fahlstrom, spokesman for the RNC Welcoming Committee. He said those arrested were in charge of various things, including finding housing for protesters and arranging food, and the arrests had adversely affected their organization.

Meanwhile, the organizers of Monday's march said they weren't changing their plans despite the GOP's decision to sharply curtail that day's session.

"The main effect of this scaling-back of the convention tomorrow is that our voices will be front and center and it will be the main news that is happening tomorrow," said Jess Sundin, of the Coalition to March on the RNC and Stop the War.

"The world will see people of this country say no to the war in Iraq."