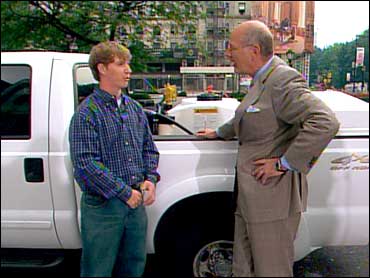 It's one thing to be fed up with high gas prices, but Atlanta high school senior Bill Bridgers decided to do something about it.

He converted his diesel pickup truck to run almost exclusively on used vegetable oil, and for the past three weeks he has been driving across the country with his father and a friend, filling people in on alternative fuel possibilities.

Standing next to his truck on The Early Show plaza Friday, Bridgers told co-anchor Harry Smith that vegetable oil "is the precursor to biodiesel. This is pure, straight vegetable oil."

The technology to retrofit the truck is "all over the Internet," Bridgers says.

He has a huge filter "to get the mandarin chicken" and other food particles and impurities out of the oil, which is then heated to 180 degrees, and pumped into the truck's engine.

Bridgers says he has lots of friends in the restaurant business who give him their used oil, which is just a waste product to them.

Gasoline is only used when the truck is first turned on, then just before it's turned off.

So far Bridgers says he and his companions have driven 7,500 miles and spent just $5 on gas. The rest of the time, his truck's been purring on the veggie oil.From Bridgers' Web site, VegTheUSA.com:

HOW IT WORKS: You must first find good waste vegetable oil, oil that does not look too dirty and that is liquid enough to pump. Also, it is good to check the oil by putting it in a clear container and evaluating its clarity. If it looks pretty transparent, the oil is good enough to go ahead and be filtered. Usually the best oil is behind Asian restaurants because they tend to use good vegetable oil to cook with.

In order to run any diesel engine on waste vegetable oil, the oil must first be filtered to capture any solids that will clog the stock fuel filter and dramatically shorten the time between fuel filter changes. It is much better to get all your filtering done before you put the oil into to your regular fuel lines. There are many different ways to clean the oil, including gravity filtering, using filter bags and gravity straining the oil through them (like how you filter coffee grounds), or even running the oil through a centrifuge.

Once cleaned, all that needs to be done is to heat the oil up. Cold oil is thick. On average, vegetable oil is 12 times thicker than diesel fuel, but when it gets to about 180F it thins out and the viscosity becomes similar to that of petroleum diesel. If oil goes through the engine when it is cold, it will strain the injector pump and necessitate its replacement. Using waste heat from the engine's coolant reservoir, which conveniently floats around 180F, the oil is thinned out to the point where it can be run in the engine.

The engine is started on a thinner fuel, either diesel or biodiesel, and ran until the oil heats up. Once hot, the fuel supply is switched over to veggie and the engine runs great. In fact, the engine runs quieter and smoother and doesn't burn dark black smoke like an engine running on petroleum. When the vehicle is done for the day, it is switched back over to the fuel it was started on. The thinner fuel flushes all the lines of the more viscous vegetable, preparing the vehicle for another hard day's work. Key Points: