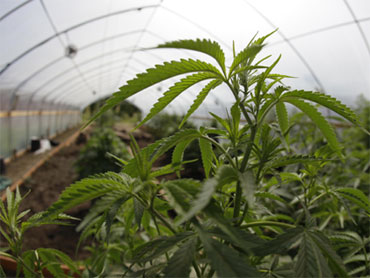 Most Americans still oppose legalizing marijuana but larger majorities believe pot has medical benefits and the government should allow its use for that purpose, according to an Associated Press-CNBC poll released Tuesday.

Respondents were skeptical that crime would spike if marijuana is decriminalized or that it would lead more people to harder drugs like heroin or cocaine. There also was a nearly even split on whether government spends too much or the right amount enforcing marijuana laws. Almost no one thinks too little is spent.

Marijuana use - medically and recreationally - is getting more attention in the political arena. California voters will decide in November whether to legalize the drug, and South Dakota will vote this fall on whether to allow medical uses. California and 13 other states already permit such use.

The balloting comes against the backdrop of the Obama administration saying it won't target marijuana dispensaries if they comply with state laws, a departure from the policy of the Bush administration, which sought to more stringently enforce the federal ban on marijuana use for any purpose.

In the poll, only 33 percent favor legalization while 55 percent oppose it. People under 30 were the only age group favoring legalization (54 percent) and opposition increased with age, topping out at 73 percent of those 65 and older. Opposition also was prevalent among women, Republicans and those in rural and suburban areas.

Some opponents worried legalization would lead to reefer madness.

"I think it would be chaos if it was legalized," said Shirley Williams, a 75-year-old retired English teacher from Quincy, Illinois. "People would get in trouble and use marijuana as an excuse."

Those like Jeff Boggs, 25, of Visalia, California, who support legalization said the dangers associated with the drug have been overstated.

"People are scared about things they don't know about," said Boggs, who is married and works for an auto damage appraisal company.

Americans are more accepting of medical marijuana. Sixty percent support the idea and 74 percent believe the drug has a real medical benefit for some people. Two-thirds of Democrats favor medical marijuana as do a slim majority of Republicans, 53 percent.

Peoples' views on legalizing marijuana or on allowing its use for medicinal purposes were largely uniform across different regions of the country, despite the fact that legal medical marijuana use is concentrated in the West.

California was the first state to approve medical marijuana, in 1996, and has been the hub of the so-called "Green Rush" to legalize marijuana. But a patchwork of local laws in the state has created confusion about the law and lax oversight led to an explosion of medical marijuana dispensaries in some places.

In Los Angeles, the number of dispensaries exploded from four to upward of 1,000 in the past five years. Police believe some were nothing but fronts for drug dealers to sell marijuana to people who have no medical need, and the city recently adopted an ordinance to reduce that number to 70 in coming months.

Among those surveyed, 45 percent said the cost of enforcing existing laws is too high and 48 percent said it's about right. Democrats, men and young people were most apt to say the cost is exorbitant.

With state and local governments desperate for cash, some legalization proponents are pushing marijuana as a potential revenue stream. But only 14 percent of those surveyed who oppose legalization would change their mind if states were to tax the drug.

John Lovell, a spokesman with the California Narcotics Officers' Association, said he wasn't surprised by the poll results because people already are aware of widespread abuse of legal prescription drugs and alcohol.

"Given that reality, we don't need to add another mind-altering substance that compromises people's five senses," Lovell said.

Allen St. Pierre, executive director of the National Organization for the Reform of Marijuana Laws, said that, since the organization was formed in 1970, there's been a slow but steady erosion of opposition to marijuana.

"Every single metric is pushing toward a zeitgeist in marijuana reform," he said.

The AP-CNBC Poll was conducted April 7-12, 2010, by GfK Roper Public Affairs and Media. It involved interviews with 1,001 adults nationwide on landline and cellular telephones. It had a margin of sampling error of plus or minus 4.3 percentage points.