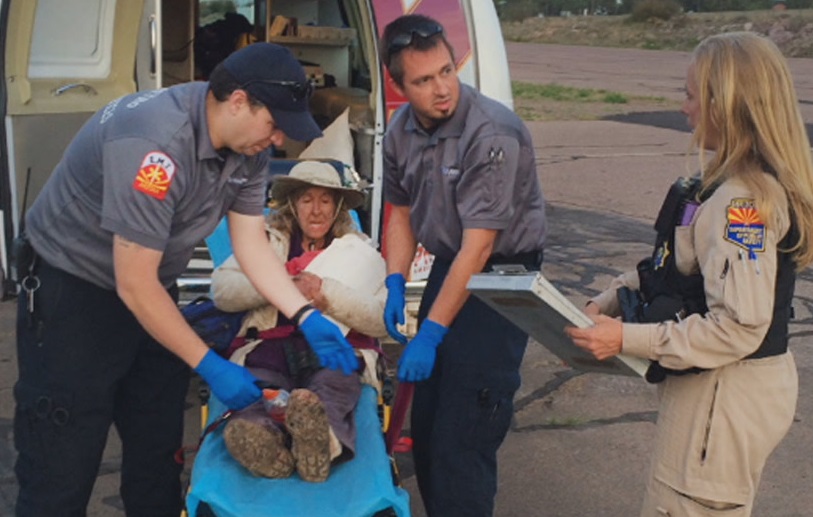 On a road trip to visit her grandchildren, Rodgers got lost. Her car ran out of gas and power, leaving her stranded on a remote stretch of the wild.

"I waited until sun up the next morning hoping a truck or car, anybody, anything would go by, even a steer! I didn't care, anything alive," Rodgers recalled.

Traveling with her dog, inside the White Mountain Apache Reservation, Rodgers climbed a ridge looking for signs of life and a cell phone signal.

But she would come across no one for nine days.

Out of food and liquids, Rodgers resorted to eating plants and drinking water from a pond. In the harsh Arizona climate she said dipped to freezing at night, she made a shelter and built a fire.

"I was eating desert plants. My dog was too, diving into clover and finding all the places that were the easiest path for me to take. She was my pathfinder on that journey," Rodgers said.

The breakthrough came when rescue teams spotted a distress signal near an area where her dog was seen.

"I found an elk carcass, bleached white, long gone. Pulled that out on the sandy beach pointed it toward a big sign that said, 'HELP' with an exclamation point made out of white stones and sticks," Rodgers explained.

Rodgers described the moment she knew she had been saved.

Rodgers was in fair condition when she was found. She and her dog are doing fine -- enough, that she even went for a hike Tuesday afternoon.