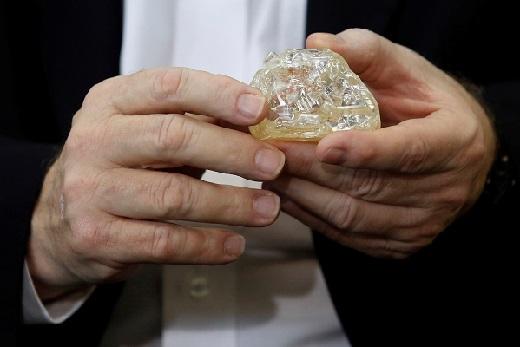 FREETOWN, Sierra Leone -- Officials say a 709-carat diamond found in Sierra Leone has been sold for more than $6.5 million. The diamond is said to be the 14th-largest ever discovered, according to the Rapaport Group, which auctioned the stone in New York on behalf of Sierra Leone's government.

The BBC reports Laurence Graff, chairman of Graff Diamonds, won the precious stone at auction. At an earlier auction, the country's government rejected a bid of $7.8 million.

According to the Rapaport Group, Graff "usually doesn't buy anything that's not a D or E color" diamond, but he "paid more money because he believes this diamond is a special diamond." He thinks it will "help the poorest people in the world."

The company says 59 percent of the money will go to the government of the West African nation, while 26 percent will benefit the artisanal diggers who found the diamond. Its discovery in March caused a sensation.

The Rapaport Group has dubbed the stone the "peace diamond" and says its sale "will provide vital lifesaving infrastructure to the area where the diamond was found."

According to the BBC, the government is expected to use the money to introduce a fresh supply of water, electricity, medical care and roads in the village of Koryardu.