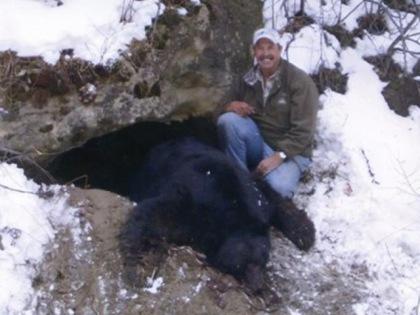 CRAIG, Colo. (CBS/KCNC) A hunter from Craig may have killed one of the biggest bears ever in Colorado.

But how the hunter bagged his prize is creating quite a controversy, according to CBS affiliate KCNC.

Richard Kendall told The Craig Daily Press that he tracked the 700 pound bear to its den north of Meeker, then waited five hours for it to come out.

When the bear did not emerge, he went in and killed it.

The Division of Wildlife says it has been getting lots of calls from people outraged about how Kendall killed the bear.

KCNC spoke with Randy Hampton of the Division of Wildlife who says the bear kill was not illegal, but it does go against some of the unspoken rules in the hunting world.

"There are certainly ethical standards within the hunting community: Don't shoot ducks on a pond. Don't shoot turkeys on a roost. Don't shoot bears in a den," Hampton told the station.

The Division of Wildlife says the incident will open up a discussion of the issue, and it will present its findings to the wildlife commission.

It will be up to them to decide if what Kendall did will be illegal in the future.