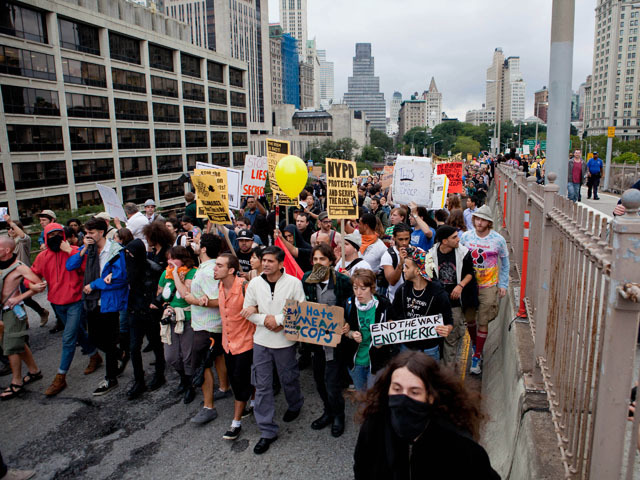 NEW YORK -New York City police say about 700 protesters have been arrested after they swarmed the Brooklyn Bridge and shut down a lane of traffic for several hours.

Police say some demonstrators spilled onto the roadway Saturday night after being told to stay on the pedestrian pathway. They face disorderly conduct and other charges. The lane has since reopened.

The group has been camped near the Financial District for two weeks and clashed with police on earlier occasions.

Earlier on Saturday, two other marches went over the bridge without problems. One was from Brooklyn to Manhattan by a group opposed to genetically modified food. Another in the opposite direction marched against poverty.

"Corporations are not people," said Max Richmond in New York City. "They don't deserve the same rights people do."

Moira Laughlin, who traveled to New York from Ohio to participate, is frustrated because she's been out of work for two-and-a-half years. "We have two teenage kids, we still have to pay the mortgage. send them to college hopefully, and it's not easy."

Hundreds of people started camping and holding marches near New York's financial district. There have also been cries of police brutality, after video circulated online showing a high-ranking police official using pepper spray on several woman penned in by plastic mesh. The police said they were investigating.

Critics say this leaderless resistance movement is unorganized, but protesters claim they don't need one focus.

"We don't have one central argument," said Jed Brandt of Brooklyn. "We have a lot, but the basic issue is our democratic structures are broken in this country."

And when a Congressman showed up - Rep. Charles Rangel, who told protesters, "We have to take our country back" - demonstrators made it clear government isn't working.

"You, sir, have no business being here - you're part of the problem," they retorted.

The Occupy Wall Street protesters say they are encouraged by growing crowds in lower Manhattan, and the movement is spreading to cities around the country.

In Chicago, the crowd outside the Federal Reserve Bank began growing a week ago.

New York City Mayor Michael Bloomberg has not said how long he'll let the protesters camp out in lower Manhattan.

Several unions are planning to join protesters in Manhattan for a march next week.