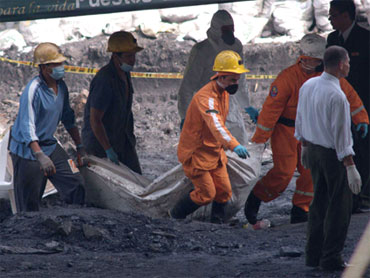 Dozens of miners were trapped and feared dead after a fiery blast tore through a tunnel in a Colombian coal mine during a shift change, killing at least 16 workers.

Rescue efforts for more than 50 miners believed missing were suspended late Thursday as relatives waited for word on the fate of the trapped workers.

Methane and carbon monoxide in the mine impeded efforts to get to where they thought the miners were trapped by the explosion Wednesday at the San Fernando mine, south of Medellin in Antioquia state.

"It's impossible that anyone is alive," said a sobbing Diana Sepulveda, 28, whose husband, 25-year-old Wilson Salinas, had begun work at just eight days earlier. "If the explosion didn't kill him, the gas did because it was very dense."

There were 70 to 80 workers in the mine and a shift change was in progress when the explosion occurred, officials said, adding that two injured workers managed to escape. Sixteen bodies were recovered.

"I felt the explosion and it lifted me up. I felt the flames on me," a surviving miner, 31-year-old Walter Restrepo, told RCN Television from a hospital bed where he was recovering from burns.

A methane gas buildup is believed to have fed the explosion that occurred in a long access tunnel that drops to a depth of 500 feet.

There were conflicting reports from Colombian officials on whether parts of the tunnel, supported by cement-reinforced steel arches, had collapsed.

Antioquia state mining secretary Nicolas Lopez said the mine's ventilation system was damaged but had resumed operation. There was no way to communicate, however, with the trapped miners to know if any were alive and receiving oxygen.

About 100 rescue workers were on the scene in rugged coffee-growing mountains in the municipality of Amaga.

Uribe said in a statement announcing the confirmed deaths that the miners faced "a very difficult fate."

Relatives of the missing miners said working conditions in the mine were generally good but that it tended to get very hot underground - about 40 to 45 degrees Celsius.

Lopez said the mine complied with the minimum state requirements set by the state Institute of Geology and Mining. However, the institute said in a news release that experts inspected the mine last month and found it "didn't have gas detection devices, one of the fundamental requirements to guarantee safety in case of an explosion."

Jorge Buitrago, general manager of mine owner Carbones San Fernando, was asked whether the mine complied with safety requirements for the monitoring and control of gases.

He told The Associated Press that "we complied with the conditions," but refused the elaborate.

Most mine explosions are caused by a spark or short-circuit of a motor.

At least nine workers were killed at the San Fernando mine last August.

The biggest loss of life at a mine in modern Colombia occurred in 1977 when 85 people died in another mine in Amaga, also in a gas explosion, said Tomas Charris, a Uniandina University researcher.

San Fernando is one of 3,000 subterranean mines in Colombia that produce 6 million metric tons of coal a year, said Jorge Martin Molina, an engineer in the mining department at Colombia's National University.